Across the Nile river from central Cairo, the zoo is home to roughly 6,000 animals from 175 species, among them some rare species of oryx and crocodile and the Nile Lechwe, an antelope indigenous to south Sudan. 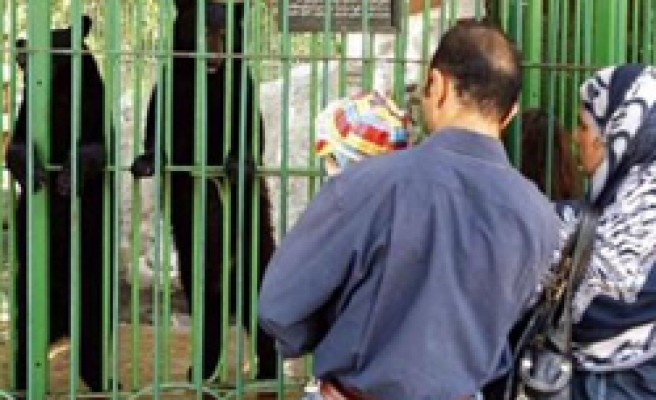 Black bears pad around their outdoor cages on a sweltering summer's day at Egypt's flagship zoo, sniffing at air that was once stifling but is suddenly cool and drizzly.

"They can breathe. This is improving their lives," senior zookeeper Abdel Razek Mustafa told Reuters as the bears stretched their limbs beneath the fans.

The air-conditioning for bears is part of efforts to revitalise Cairo's scruffy but historical Giza Zoo and help it rejoin a world zoo association after its exclusion in 2004.

Giza Zoo was once among the crown jewels of African zoos. It was commissioned by Khedive Ismail of Egypt's royal family and opened in 1891 to showcase imported flowers, exotic plants and a huge exhibition of African wildlife.

But it has been beset with problems in recent years -- from the slaughter of two camels by night-time intruders to the infection of some birds with the deadly H5N1 avian influenza.

Animal rights activists also complain that the zoo's Victorian-style cages -- some more like display cases than homes for animals -- are too small and dingy, and that the zookeepers know little about animal health.

"The conditions are just horrendous," said Nadia Montasser, an activist with People for the Ethical Treatment of Animals (PETA), who was cautiously optimistic about the changes.

"I am against zoos. But you can't really do anything about it here in Egypt. You can't close the zoo. Where are all the animals going to go? ... These animals are not wild animals anymore. They have been living in cages all their lives."

Across the Nile river from central Cairo, the zoo is home to roughly 6,000 animals from 175 species, among them some rare species of oryx and crocodile and the Nile Lechwe, an antelope indigenous to south Sudan.

But it has been on a path to slow decline for years. Zoo spokeswoman Mona Sadek said that at one point several years ago, it had lost up to a quarter of the species it once held.

She said mismanagement ultimately cost the zoo its membership in the World Association of Zoos and Aquariums (WAZA), after a previous administration fell into arrears on membership fees and then ignored the recommendations of a WAZA inspection team.

"Usually, when animals die, we replace them. But during this period they didn't replace the important species," she said, adding that WAZA had found the zoo to be below standard.

WAZA Executive Director Peter Dollinger declined to give details as to what WAZA found when it inspected the zoo prior to its exclusion, but said: "There were things that were not acceptable."

The problems had started long before then.

Two lions killed a zookeeper in 1993 after he left the outer door to their cage open while feeding them. They were then shot dead. Later, an elephant trampled and killed another zookeeper.

More recently, a polar bear, miserable in the Cairo heat, was sent to the coastal city of Alexandria where zoo officials hoped it would fare better. The last of the giraffes perished in recent years, although the zoo hopes to replace them soon.

In 2006, Egypt briefly closed the zoo after dozens of birds died, some from the bird flu virus that had just hit the most populous Arab country. The health ministry said then that the zoo had to slaughter more than 500 birds and drain its ponds.

A year ago, intruders broke into the zoo under cover of darkness and slaughtered two camels. Sadek said one of the men confessed after being caught that he had wanted to use parts of the camel for black magic.

Then in 2007, a new director was named for the zoo, and signs of change now abound.

In the reptile house, workers are building customised mini-jungle gyms for the lizards. Outside, the zoo is working to combine several monkey cages to give the animals more space.

The zoo has designed a larger habitat for its increasing number of chimps, including three who were recently confiscated from pet shops and a resort. But the zoo must find sponsors to pay 2.7 million Egyptian pounds ($510,000) for construction.

"With the budget we have, we can't afford any of this. It is just for feeding and maintenance," Sadek said.

Zoo officials also hope to build a new yard for the bears to roam, and already have funds in place for a new elephant house.

Later this month, an official from the African Association of Zoos and Aquaria (PAAZAB) will inspect the zoo and make recommendations for further changes. Joining PAAZAB is a first step toward regaining membership in the world zoo body.

"We have never turned a zoo down," PAAZAB Executive Director Dave Morgan said, adding the group had an all-inclusive approach to membership but would recommend improvements.

"We do follow up on that and try to encourage and cajole change where change is needed. Our approach is ... working for change from within, rather than trying to force it from without."