The choir evoked the 99 names of God in the Koran, standing beneath the great cross in the apse of the eighth century basilica of Hagia Eirene. It was a high note in the Istanbul Cultural Foundation's summer music festival, a first performance following t 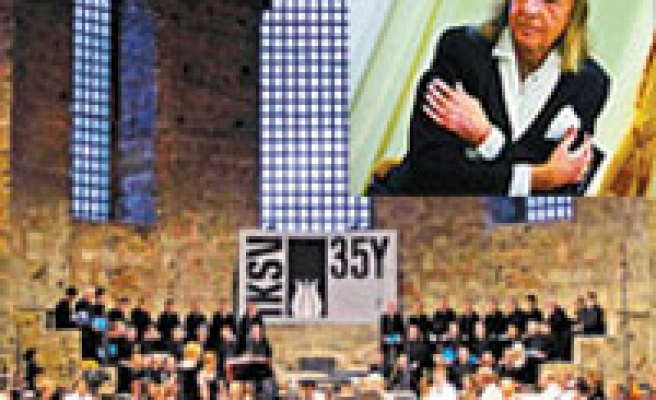 The choir evoked the 99 names of God in the Koran, standing beneath the great cross in the apse of the eighth century basilica of Hagia Eirene. It was a high note in the Istanbul Cultural Foundation's summer music festival, a first performance following the London premiere of Sir John Tavener's "The Beautiful Names."

How did Sir John, himself a convert to Greek Orthodoxy, react to crossing theological divides and hear his work performed to a largely Muslim audience beneath that cross, one of the masterpieces of iconoclastic art.

"In some ways I rather wish it hadn't been there," he replied. "This may be a strange reaction, but I don't think any kind of outward manifestation is good when one is trying to do something that is inward." He pauses to reconsider and decides that perhaps the cross was not in the way after all. "Sacrifice is a practice common to all religion." At a symbolic level the crucifixion stands for the annihilation of ego, which he said, was close to Sufism, and recognition of the God within.

"The Beautiful Names," performed by the BBC Symphony Orchestra and Choir, was commissioned by Prince Charles, whose voice and cadences uncannily resemble those of Sir John.

It was, of course, his "Song for Athene" that accompanied the coffin of Diana, princess of Wales, down the aisle of Westminster Abbey, a notoriety that helped transform him from someone who merely looked like a pop star (long hair, white Indian shirts unbuttoned down to the waist) into the same sort of celebrity status. The Beatles had long realized this and in 1968 had recorded his "The Whale" on their Apple label. In an English context he is less iconoclastic than eccentric, cultivating a musical style that The New York Times recently cited as "Holy Minimalism."

Given his royal patron's interest in interfaith dialogue, did Sir John see his own work in helping to bridge a cultural divide? It was not his intention, he said. The score was completed several years ago. "If it does bring about greater [inter-faith] understanding, I'm very happy," he said, but incidental to the reason it was composed. "My reason for writing it was an inner one," he said. He had known about the different names for God in Islam as a young child and was just happy to be able to express this knowledge in music so many years later.

When "The Beautiful Names" was performed last Tuesday in London's Westminster Cathedral, there were blogs of protest by those insisting that when it comes to names, there were at the very most only three. ("Shame, shame, shame on the cardinal to allow this denial of the Holy Trinity in Westminster Cathedral" exclaimed one outraged Internet voice.) Sir John Tavener is at best bemused at the suggestion that he caused offense. There are Christian fundamentalists as well as those in the Islamic world, he said. "It's a manifestation of the times in which we live."

The London critics were forthcoming with praise, if at the same time a little guarded. "Fascinating, beguiling and flawed," wrote Neil Fisher in The Times. This, too, provokes a shrug. The critics, he says, write about the music; they haven't a clue about God. He believes the important thing was that the piece could be performed in both a Catholic cathedral and in a country that believed in Islam. Far more important than the reviews were the remarks of those who came up to him after the performance in İstanbul. "It clearly meant so much to them. That's what moved me."

Were the two audiences hearing the same piece of music in the same way? He said that invariably there were differences. There were dissimilarities of culture and of temperament. These were important and not to be ignored. "What I try to say in the music is that these are not at the inner level, which is what music addresses. At a higher level religions point to the same God." While not a student of Turkish politics, Sir John said he had followed debates about whether women could wear headscarves in universities. He said it was "crazy" that they could not -- another type of fundamentalism. "But then the whole world has become a lunatic asylum. Not just Turkey."