The authorities, eager to improve air quality before the Games, will restrict vehicle use starting on Sunday. 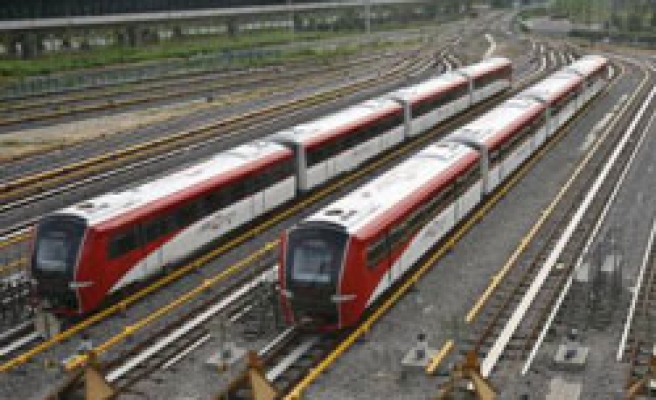 Beijing opened two new subway lines on Saturday, delayed from a planned late-June start but just in time to carry passengers banned from their cars as the capital tries to clean up its skies before next month's Olympics.

Passenger service has yet to start, however, on a third line that will serve the Olympic Green and was the site of an opening ceremony and test ride for the media on Saturday morning.

An official with the Beijing subway operating company said it was not clear when the line would begin regular service.

The three new lines, which cost 22.3 billion yuan ($3.3 billion) to build and are part of massive infrastructure plans to ease transport during the Games, will increase the city's subway lines to eight and expand their reach by 40 percent to 200 km (125 miles).

Eager crowds rushed through the turnstyles when the airport line formally opened in the afternoon, while a large contingent of uniformed security officers kept watch over travellers with suitcases and families out for a short excursion on the gleaming new trains.

Inside subway cars on the Number 10 line, a commuter route, parents sat with children on their laps, many watching clips of professional basketball games on video screens that are also due to carry live shots of the Olympics.

In addition to shuttling Olympic visitors around town, the new lines will boost transport options for Beijing's residents, whose rising wealth has triggered a boom in car ownership and severely worsened the city's chronic smog and traffic jams.

The Beijing authorities, eager to improve air quality before the Games start on Aug. 8, will restrict vehicle use to alternate days for even- and odd-numbered licence plates starting on Sunday.

This will require an additional 4 million people to rely on the public transport system, according to the official Xinhua news agency.

While the new lines' maiden journeys went off with no apparent hitches, Zhou Zhengyu, deputy head of the Beijing Municipal Committee of Communications, sidestepped a question at a Thursday news conference about whether there would be enough time to iron out any kinks before the Games kick off.

Nor did he say if there had been any problems with construction that might have delayed the opening, originally due by late June.

Beijing has largely avoided the problems the last Olympic host, Athens, encountered with delayed infrastructure projects, and has won praise from the International Olympic Committee for finishing venue construction work either on time or ahead of schedule.

The city has also upgraded trains on existing lines, the first of which dates from the 1960s, although some trains and stations will remain without air conditioning by the time the Olympics come in August, one of the hottest months of the year.