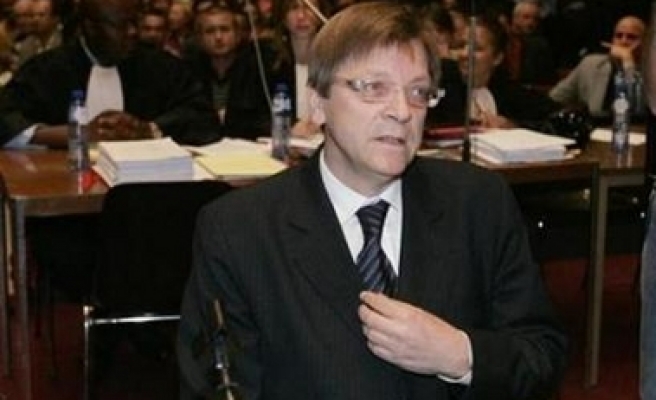 Verhofstadt told party supporters at the party headquarters that the voters have clearly made their choice. He congratulated the centrist alliance of Flemish Christian Democrats and Flemish nationalists (CD&V/N-VA) for their good results.

"I was the figurehead of the party for the elections. I take the responsibility for the result," the 54-year-old leader of the Liberals said.

Flemish television VRT's projections based on early tallies show that the Flemish Christian Democrats, led by Flemish regional leader Yves Leterme, led the race with 32.4 percent of the vote in the Dutch-speaking region of Flanders, up from to 25.8 percent in the national elections in 2003.

Belgium, with a population of 10.5 million, has regional rather than unified national political parties. Traditionally, the party winning the most votes in Flanders, where 60 percent of Belgians live, is the biggest party in parliament and has the first try at forging a coalition. Its leader is usually the candidate for the new prime minister.

While admitting defeat, Verhofstadt defended the work of the two Belgian governments in the past eight years under his leadership.

"The country is on a good track. We achieved major progress on both the ethical front and the international front. Our voice is heard", he said.

Recalling his two terms, Verhofstadt said it was a pleasure being a prime minister. "Those were intense years," he said, adding that Belgium is a marvelous country and he was proud to lead it.

At the gathering of party faithfuls of the Flemish Christian Democrats, Leterme thanked his party's supporters for the big win.

"As of tomorrow we will have to show we are worth your trust, to make change happen, to make sure that we have better governance," he said as the counting was going on.

"It is time for change. People want a different course," he said.

The Flemish Christian Democrats had stayed in the federal government for most of the past 50 years until it lost to the Liberals eight years ago.

Leterme, 46, said a government with Christian Democrats would push for more regional autonomy for Flanders, the wealthiest of the three Belgian regions, and the French-speaking southern region of Wallonia.

In Wallonia, the Socialists are locked in a neck-and-neck race with the Liberals. The Socialists looked set to lose a few seats in parliament but could still hang on to the No. 1 position in the francophone region.

Sunday's polls opened at 8 a.m. local time and closed at 3 p.m. Complete results are due to come out around midnight.

Coalition governments are the norm in Belgium, which uses proportional representation election system and is one of the few countries where voting is mandatory.

It could take several weeks or even months before the winning parties in the country's two separate regions succeed in forming anew coalition.

The Senate has 71 members, which is a mixture of directly elected senior politicians and representatives of the different regions and linguistic communities. Last Mod: 11 Haziran 2007, 12:27
Add Comment