Leopold Weiss, a gifted young writer, traveler and linguist and with deep roots in European culture, took the road eastward to Makkah. 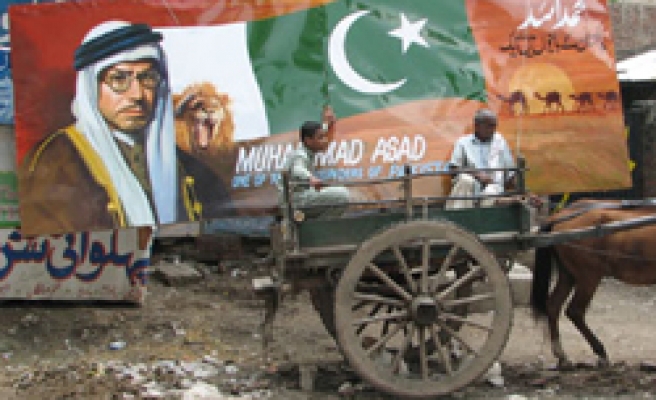 Muhammad Asad (born Leopold Weiss in July 1900 in what was then Lemberg in the Austro-Hungarian Empire, now Lviv in Ukraine; died 1992) was a Jew who converted to Islam.

Two roads diverged in Berlin in the 1920's: a well-worn one to the West, the other, rarely traveled, to the East. Leopold Weiss, a gifted young writer, traveler and linguist with a thorough knowledge of the Bible and the Talmud and with deep roots in European culture, took the road eastward to Makkah.

He traveled that road as Muhammad Asad, and his name now figures prominently on the roll of 20th-century English-language Muslim scholars and thinkers.

The story of how Asad walked out of Berlin, away from the West and into a new spiritual life is best told in his own words and an Old Testament simile: "After all, it was a matter of love," he wrote, "and love is composed of many things; of our desires and our loneliness, of our high aims and our shortcomings, of our strengths and our weaknesses. So it was in my case. Islam came over me like a robber who enters a house by night; but, unlike a robber, it entered to remain for good."

Muhammad Asad was born Leopold Weiss in July 1900 in the city of Lvov (German Lemberg), now in Poland, then part of the Austrian Empire. He was the descendant of a long line of rabbis, a line broken by his father, who became a barrister. Asad himself received a thorough religious education that would qualify him to keep alive the family's rabbinical tradition. He had become proficient in Hebrew at an early age and was also familiar with Aramaic. He had studied the Old Testament in the original as well as the text and commentaries of the Talmud, the Mishna and Gemara, and he had delved into the intricacies of Biblical exegesis, the Targum.

His family moved to Vienna, where 14-year-old Weiss ran away from school and tried unsuccessfully to join the Austrian army to fight in the First World War. No sooner had he finally been officially drafted than the Austrian Empire collapsed, along with his dreams of military glory.

After the war, he pursued philosophy and art history at the University of Vienna, but those studies failed to satisfy him and he abandoned them to seek fulfillment elsewhere. Vienna at that time was one of the most intellectually and culturally stimulating cities in Europe, a hothouse of burgeoning new perspectives on psychology, language and philosophy. Not just its academic institutions, but even its famous caf