Fourteen individuals from left-leaning ultra-nationalist groups were taken into police custody in dawn raids on Friday over alleged links to a criminal network with suspected ties to the military and the bureaucracy. 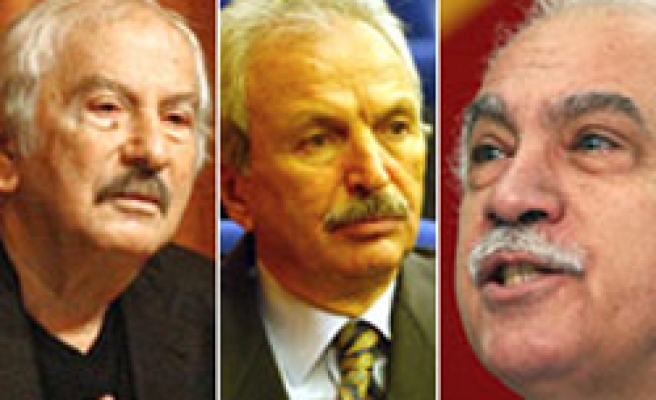 Workers' Party (İP) Chairman Doğu Perinçek, İP Secretary-General Ferit İlsever and Cumhuriyet daily chief columnist İlhan Selçuk, as well as former İstanbul University Rector Kemal Alemdaroğlu, were detained as part of an investigation into a criminal network that calls itself Ergenekon, after a legend of how Turks came into being.

The ongoing investigation had previously uncovered evidence showing that the gang was attempting to prepare the groundwork for a coup d'état in Turkey in 2009.

Ergenekon is suspected of shady links to groups hidden within the state. These groups are commonly referred to as Turkey's "deep state," a vague concept of a phenomenon in which individuals and groups occupying various positions in the state take justice into their own hands to shape Turkey in accordance with their political convictions.

The arrests come at a time when allegations have been made that a recent closure case against the ruling Justice and Development Party (AK Party) was filed with the Constitutional Court to prevent further development of the Ergenekon investigation. The police have also raided the offices of TV station Ulusal Kanal and the Aydınlık newsweekly.

"[Prime Minister Recep] Tayyip Erdoğans' crimes are growing. [The AK Party] will be crushed under them," threatened Perinçek as he was being escorted by the police out of the Fatih Courthouse. "We were taken into custody illegally," he said. Supporters of his party flocked to the İstanbul Police Department building on Vatan Street in the morning.

Prime Minister Erdoğan, speaking at a gathering of the chairmen of his party's provincial branches yesterday, said cleansing the country of gangs was part of the government's target of creating a Turkey that is a wealthy member of the EU with a strong democracy.

"Some might not concern themselves with preparing our republic to celebrate its 100th anniversary with a strong democracy and economy. But we will not take a single step backward in protecting the rights of the Turkish nation. This is how we set out on this journey."

Main opposition Republican People's Party (CHP) leader Deniz Baykal was quoted in news reports as commenting on the arrests, saying, "I hope the issue will be referred to the judiciary in a speedy manner." He said the Interior Ministry had to offer a detailed explanation of the Ergenekon investigation to the public. "Most certainly, whatever there is that threatens the law and the democratic order in Turkey should be uncovered, but it is unacceptable to use power centers to put pressure on the country's respected philosophers, journalists and democrats. We are following the events keeping these fundamentals in mind." He said he expected more serious problems to arise in Turkey after yesterday's arrests, but did not elaborate.

Tuncay Özkan, the owner of the Kanaltürk television station, which espouses an editorial policy close to that of Cumhuriyet and is known for its ideological similarities with the İP, speaking to the SKY Türk television station, said of the arrests: "We are defending freedom and democracy. Our fight is for the supremacy of the law. We will never step back from this fight."

Özkan added, "This is the settling of accounts between the enlightenment of Atatürk and darkness." In response to a question on journalist Şamil Tayyar's statement that Özkan might also be taken into custody as part of the investigation, he said: "I am in İstanbul. I am ready to be taken into custody by whichever of our prosecutors wants me."

Referring to journalist Can Ataklı's prediction that "everyone who is against the AK Party will be arrested under the Ergenekon investigation," Özkan said: "No, that is not going to happen. Turkey has a democracy. So the AK Party will take everyone under custody and scare off the opposition; will we all be scared? These are cheap tricks."

'GET READY TO ANSWER FOR ACTIONS'

In his last column before being taken into custody, Selçuk wrote, "We should be ready to answer for our deeds." He added, "[Prime Minister Erdoğan] will either respect the constitution and the judiciary, just like any other man on the street, or we should be ready for a settling of accounts to remind him that he is no Louis XIV. There is no other rational way."

In his column Selçuk said both moderate and fundamentalist Islamists have taken over the country, its municipalities and the state. Saying that the AK Party government was bringing Turkey toward the party's goal of a state based on religious law at full speed, he wrote that its supporters "were intoxicated without drinking."

The arrests follow the interrogation on Wednesday of Sedat Peker -- an ultranationalist underworld leader currently serving 14 years in prison for involvement in organized crime -- over his alleged links to the Ergenekon gang. Suspects of the 1996 Susurluk affair Yaşar Öz and Semih Tufan Gülaltay were also interrogated by on Wednesday as part of the same investigation.

Figures known for being part of the neo-nationalist movement in Turkey were bitter about yesterday's arrests. Support for Modern Life Association (ÇYDD) President Türkan Saylan said Selçuk's arrest was the government's way of taking "vengeance" on secularists. Former Chief Prosecutor of the Supreme Court of Appeals Vural Savaş said he did not believe that Perinçek, Alemdaroğlu or Selçuk had ever been involved in any activities outside the law. "The only reason for taking these people into custody is to create the false image that 'see, these too, are part of Ergenekon'."

The editor-in-chief of the Ulusal Kanal television station, Yalçın Büyükdayıoğlu, asserted that the detainments were political. "The AK Party has violated the Constitution and started a major attack on the state institutions that might stop this violation," he said. CHP İstanbul deputy Nur Serter agreed that the AK Party was taking revenge on secularists for supporting the headscarf ban.

In January 39 people were arrested as part of an investigation following up on a police raid on a house being used as an arms depot in İstanbul last June. Those arrested included retired Maj. Gen. Veli Küçük, who is also the alleged founder of an illegal intelligence unit in the gendarmerie, the existence of which is denied by officials; the controversial ultranationalist lawyer Kemal Kerinçsiz, who filed countless suits against Turkish writers and intellectuals who were at odds with Turkey's official policies; retired Col. Fikret Karadağ; Sevgi Erenerol, the press spokesperson for the so-called "Turkish Orthodox Patriarchate"; and Sami Hoştan, a key figure in an investigation launched after a car accident in 1996 near the small town of Susurluk that uncovered links between a police chief, a convicted ultranationalist fugitive and a member of Parliament. Ali Yasak, a well-known gangster linked to the figures in the Susurluk incident, was also detained in the operation.

The group is also suspected of involvement in the murder of journalist Hrant Dink in January of last year, a shooting at the Council of State in 2006 that left a senior judge dead, a hand grenade attack on the hard-line secularist Cumhuriyet daily's İstanbul office and recent non-fatal attacks on two priests. The number of people in custody on suspicion of having links to the gang is said to have surpassed 50 with the recent detentions, sources say.