Two blind patients have had revolutionary surgery involving the implantation of a bionic eye to help them to see. 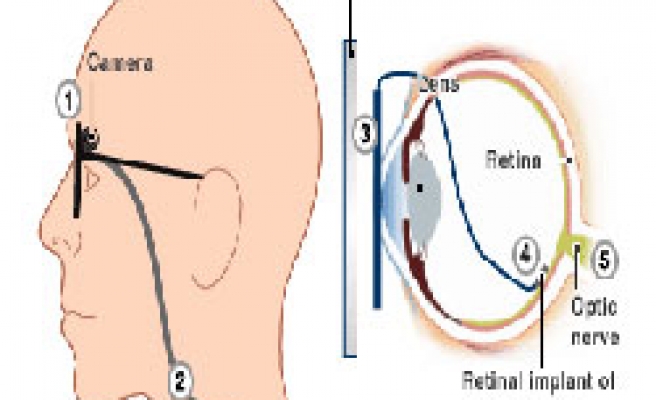 The experimental surgery was carried out at Moorfields Eye Hospital in London last week, as part of an international trial of the new technique, involving 15 patients in five countries, Belfasttelegraph reported.

The aim is to restore a basic level of vision so that blind people can "see" spots of light and distinguish light and dark shapes. If it works, surgeons hope that the technique could offer new hope to blind people in the same way that cochlear implants, devices surgically inserted into the skulls of deaf people, have helped tens of thousands to hear.

The two patients operated on at Moorfields, who have not been identified, were fitted with a pair of glasses carrying a tiny camera and transmitter which sends a signal to an ultra-thin electronic receiver inserted into the back of the eye, attached to the retina.

Images picked up by the camera and transmitted to the receiver stimulate the remaining healthy nerves in the retina, sending a signal via the optic nerve to the brain. The pattern of light and dark spots perceived by the brain depend on which electrodes in the retina are stimulated.

Lyndon da Cruz, the consultant ophthalmic surgeon who carried out the surgery, said the operations had gone well and the patients were recovering, but the device had not yet been tested. "Over the next few weeks we will check if the device works by slowly introducing stimuli to see what response they produce," he said.

Mr Da Cruz said it could be months before the first results of the trial were made publicly available. Both patients have retinitis pigmentosa, an inherited condition that destroys the retina and which affects an estimated 20,000 people in the UK.


If the device worked, it could help people suffering from severe blindness of any cause provided their optic nerve was still functioning, he said. However, it would not be suitable for people suffering from macular degeneration, the commonest cause of blindness which destroys the centre of the retina, because these patients retain peripheral vision and that would still be better than anything the device could deliver, he said.

The operation at Moorfields was supervised by American doctors who developed the technology, called Argus II, with the company Second Sight. Similar operations have been carried out in Los Angeles, Mexico City, Geneva and Paris as part of the international trial.

The US inventors of the device are hoping to shrink the camera so it will ultimately be small enough to fit within the eyeball.

Professor John Marshall, of St Thomas' Hospital, London, welcomed the advance, but warned: "The general public should not run away with the idea that this is going to be routine surgery for blind people in the immediate future because there is an enormous amount to learn."