Blair leaves party leadership, will resign as PM on June 27

Tony Blair announced on Thursday he would step down on June 27 after a decade as prime minister and told Britons disillusioned by the war in Iraq that he had always done what he believed was "right." 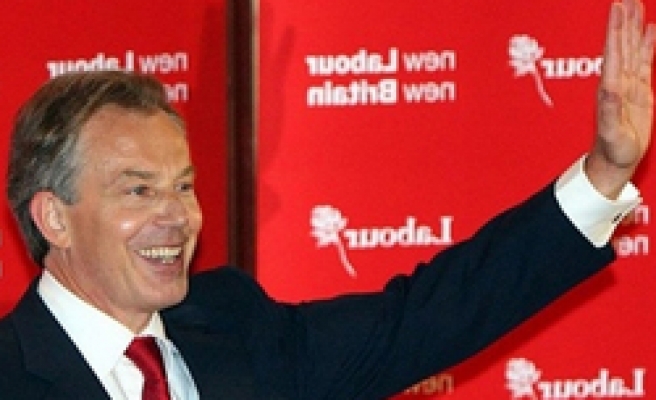 Tony Blair announced on Thursday he would step down on June 27 after a decade as prime minister and told Britons disillusioned by the war in Iraq that he had always done what he believed was "right."

Blair's popularity has suffered since he sent British forces to join the 2003 U.S.-led invasion of Iraq and a Labour Party rebellion in September forced him to say he would quit within a year.

"Hand on heart, I did what I thought was right," Blair told Labour Party members in his constituency in northern England.

"I may have been wrong, that's your call. But believe one thing, if nothing else, I did what I thought was right for our country."

Blair's resignation triggers a contest to lead the Labour Party which finance minister Gordon Brown is favorite to win.

Brown would become prime minister after the departure of Blair who is only the second person in a century to have held the post for 10 years.

"I think that's long enough, not only for me, but also for the country and sometimes the only way you conquer the pull of power is to set it down," Blair said.

He will be remembered for helping bring peace to Northern Ireland after decades of violence, winning three straight elections for Labour for the first time and dragging it from its left-wing roots to the centre of British politics.

An opinion poll published by the Guardian newspaper on Thursday showed 60 percent of voters believed Blair would be remembered as a force for change, though not always good. The ICM poll said 44 percent believed he had been good for Britain.

Blair had long been expected to hand over power before the end of his third term to let another Labour leader guide the party into the next national election due by May 2010.

Brown, whose official residence is next door to Blair's in London's Downing Street, has waited with increasing impatience for the departure of his neighbor. Critics say their rivalry, often bitter, has diluted the government's effectiveness.

Blair has been tainted by a corruption scandal in which he became the first serving prime minister to be quizzed by police in a criminal probe.

Detectives twice questioned Blair as a witness in their investigation into a political party funding scandal.

Blair and Brown were the twin architects of Labour's rise to power in 1997 after 18 years in the political wilderness.

Under Blair, Britain's economy has enjoyed the strongest era of growth for three centuries, high employment and low interest rates. But Brown will take over as interest rates hit a six-year high on Thursday and are set to rise again.

Brown's chief challenge will be to revive support for Labour and overtake the opposition Conservatives in the opinion polls.

Conservative leader David Cameron, 40, has revitalized the party of Margaret Thatcher -- the only prime minister to hold power longer than Blair in the past century -- since he became leader in 2005. Polls suggest he could win a slim majority in parliament in a national election.


Prime Minister Tony Blair said Thursday that he will step down as prime minister on June 27, after a decade in office in which he brokered peace in Northern Ireland and followed the United States to war in Afghanistan and Iraq.

Surveying his time in power, Blair, 54, told supporters: "Hand on heart, I did what I thought was right."

Following the Sept. 11, 2001, terrorist attacks in the U.S., it was right, Blair said, to "stand shoulder to shoulder with our oldest ally, and I did so out of belief."

"And so Afghanistan, and then Iraq — the latter bitterly controversial.

"And removing Saddam and his sons from power, as with removing the Taliban, was over with relative ease. But the blowback since, with global terrorism and those elements that support it, has been fierce and unrelenting and costly.

"And for many it simply isn't and can't be worth it. For me, I think we must see it through."

In a short, almost apologetic speech, Blair added: "I may have been wrong. That's your call."

Treasury chief Gordon Brown, Blair's partner in reforming the Labour Party and a sometimes impatient rival in government, was expected to easily win election a the party's new leader and become the next prime minister.

Blair's announcement is one that his Labour Party, and the nation, have been expecting for nearly three years, ever since the prime minister said in 2004 that his third term would be his last.

"Today, the beginning of the end," read the front page of The Guardian newspaper.

Blair met earlier with Cabinet members, who left No. 10 Downing Street without answering questions shouted by reporters swarming outside.

Brown has already declared he will be a candidate; at least one opponent from the party's left wing was expected to announce his candidacy Thursday afternoon.

John Burton, Blair's political representative in the northern parliamentary district of Sedgefield, said earlier that Blair would continue to represent Sedgefield in Parliament until the next national election, expected in 2009, unless he is offered "a major international or
United Nations job."

The Iraq war, a police investigation of allegations that the government traded honors for political contributions and endless questions about when Blair would step down overshadowed his last term in government, after winning the third term in May 2005.

Blair has stopped short of openly endorsing Brown, a stern Scot who has long coveted the top job, but said last week that Brown would make "a great prime minister."

"One of the things I very much hope will be part of the legacy of the government is the strongest economy in the Western world which he has been responsible for," Blair said.

Blair led Labour to two landslide election wins in 1997 and 2001, and a narrower but still comfortable victory in 2005.

The first term was marked by several significant initiatives: the Bank of England was given the freedom to set interest rates, Scotland and Wales were given regional governments, London gained an elected mayor and all but 92 hereditary members were ejected from the House of Lords.

In 1998, Blair and Irish Prime Minister Bertie Ahern led successful negotiations for a peace agreement in Northern Ireland, launching a process which reached its culmination earlier this week as former enemies from the Protestant and Catholic communities joined to form a new regional government.

The Iraq war severely dented Blair's popularity. Blair's close alliance with
President Bush was unpopular at home, there were mass marches in Britain opposing the U.S.-led invasion before it began, and the government's claims that
Saddam Hussein was building an arsenal of weapons of mass destruction proved false.

In recent months, Blair's thoughts have turned to the lessons of his decade in power.

"When I first started in politics, I wanted to please everyone," Blair said during a tour of the Middle East in December. "After a time I learned that you can't please everyone, and you learn that the best thing is to do what you think is right and everyone can make their judgment."

Blair is the first British prime minister since Harold Wilson in 1976 to leave at a time of his own choosing, rather than by losing an election or being forced out by the party.

Blair's leaving had little of the drama of downfall of Margaret Thatcher, who announced her resignation in 1990 just nine days after she was the target of a savage resignation speech by her former Cabinet colleague, Geoffrey Howe. Last Mod: 10 Mayıs 2007, 16:52
Add Comment