Blair may be Palestine envoy for Quartet, US and Israel positive

Middle East power brokers should appoint a special envoy to lay the groundwork for a Palestinian state, Washington said, amid reports Thursday that Prime Minister Tony Blair will take up the job after he retires this month. 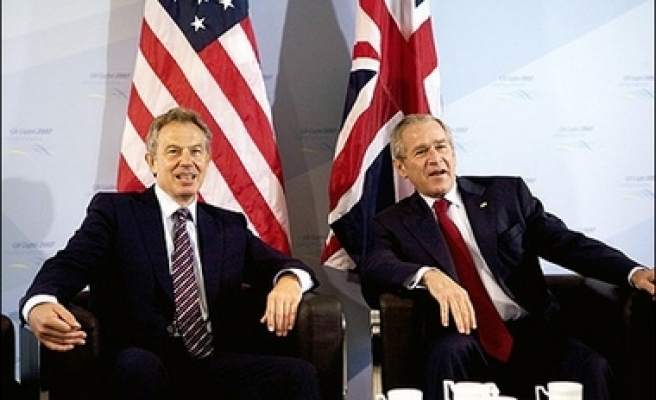 Middle East power brokers should appoint a special envoy to lay the groundwork for a Palestinian state, Washington said, amid reports Thursday that Prime Minister Tony Blair will take up the job after he retires this month.

State Department spokesman Sean McCormack said the appointment of a new envoy was critical amid renewed hopes to establish a Palestinian state, after Hamas' takeover last week of the Gaza Strip that resulted in the establishment of a new Palestinian government.

The Washington Post in its Thursday edition cited unnamed US and Israeli officials as saying that the administration of President George W. Bush was laying the groundwork for Blair to be appointed as an envoy for Palestinian governance and economic issues.

"Can we identify a person that could fulfill those functions? And I think that the idea has some merit. Clearly, there needs to be some more consultations on the matter," McCormack said.

"But as for particular individuals, at this point I'm certainly not going to get into it."

Blair is due to step down as prime minister on June 27 after 10 years in power.

The diplomatic quartet for the Middle East, comprising the United States, Russia, the United Nations and European Union, previously had an envoy, ex-World Bank president James Wolfensohn, with a limited mandate.

He took up the post in May 2005 to help coordinate Israel's planned withdrawal from the Gaza Strip and to spearhead reconstruction efforts ahead of hoped-for Palestinian sovereignty over the area.

But Wolfensohn left the post about a year later, citing frustration with the stymied Middle East Road Map process.

McCormack said there is now "a need to perform that particular function in working with the Palestinians in the Palestinian system" to develop institutions for a "well governed" state.

Under the Bush administration's plan, Blair would report to the Quartet and focus on Palestinian internal issues, the Post said. Political negotiations involving the Palestinians and countries including Israel would be left to US Secretary of State Condoleezza Rice, whose idea it was to consider him.

Bush and Israeli Prime Minister Ehud Olmert said after talks in Washington Tuesday that they hoped Abbas and his new cabinet could pave the way towards renewed talks on creating a Palestinian state.

The Washington Post said Israel had welcomed the prospect when Bush discussed the idea with Olmert this week.

The BBC, quoting an unnamed White House official, said Bush and Rice had discussed the idea of a Palestinian envoy with Blair. White House and State Department officials refused to confirm or deny the report. Last Mod: 21 Haziran 2007, 12:40
Add Comment