Blair to be inter-faith envoy despite 'bloody legacy'

Tony Blair's reported plans to cast himself as a multi-faith ambassador after leaving Downing Street were met by scorn and incredulity from lawmakers and experts, who believe his "bloody legacy" has widened rather than bridged the Islam-West divide. 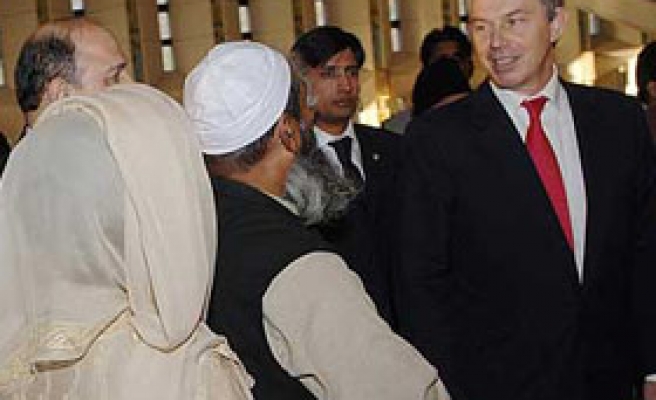 Tony Blair's reported plans to cast himself as a multi-faith ambassador after leaving Downing Street were met by scorn and incredulity from lawmakers and experts, who believe his "bloody legacy" has widened rather than bridged the Islam-West divide, The Independent reported Sunday, May 6.

"He may want to build bridges between the world religions but the fact is he has already burnt them," said Norman Baker, a Liberal Democrat MP.

Blair's friends told The Independent that he was planning to set up a Blair Foundation in London soon after stepping down to mainly enhance dialogue between Christianity, Islam and Judaism.

"One of the things he wants to focus on is the inter-faith stuff," said one friend.

"It has always been something he has been interested in."

But several MPs, who were not identified by the daily, balked at Blair's new role, arguing that he has done more to create divisions between Islam and the West than any prime minister in living memory.

"He has been seen to be partisan in the Middle East, slavishly following (US President George) Bush, and will have no credibility with the Islamic world. It shows how deluded he is. His bridge will at best be a pier," insisted Baker.

Political experts and journalists have also questioned Blair's "faith healing" mission, saying the man leaves behind a "bloody legacy" that turned him into an emperor with no clothes.

Blair, whose popularity has slumped over the Iraq war and a series of political scandals, is set to announce on Tuesday, May 8, he will leave office.

Political experts and journalists agreed Blair was leaving a less secure Britain with the terror ghost hovering around primarily because of following Bush's blindly in his Iraq's disastrous adventure.

"Blair's period of office may have coincided with the disarming of republican and some loyalist paramilitaries, but it has also seen hundreds of Britons rallying to Al-Qaeda," The Independent's veteran journalist Francis Elliott wrote in an editorial on Sunday.

"In reaching for a military solution to Iraq — which in any case was not a part of the Al-Qaeda equation in 2003 — he handed terrorists a new cause and a training ground."

Elliot wrote that terrorism on UK streets was transformed from 10 years ago.

"It is much more deadly, more unpredictable and far harder to prevent," he said, adding that Blair's "crusades" overseas have made Britain a prime target for terrorists.

Professor Paul Wilkinson, of the Centre for the Study of Terrorism and Political Violence, agreed Iraq gifted Al-Qaeda what he called a lifeline.

"Nobody could credibly argue that Iraq caused terrorism, but to pretend that it does not exacerbate it was really foolish," he told The Independent.

The British parliament's influential Foreign Affairs Committee concluded last July that international conflicts, such as the situation in Iraq and the occupied Palestinian territories, breed feelings of injustice in the Muslim world, boosting support for terrorism.

A 2006 BBC World Service's survey found that people in 33 out of 35 countries worldwide believed the Anglo-American invasion had increased the threat of terrorism.

Crispin Black, a former intelligence officer, said intelligence services and the Foreign Office repeatedly warned Blair about the consequences for domestic terrorism of the Iraq adventure.

"Regardless of what you think about the rights and wrongs of the Iraq war, the question is, when warned, what did Blair do to secure the home front?" he told The Independent.

Analysts believe Blair, the Labour Party's longest-serving prime minister, would definitely be remembered for his draconian anti-terror measures, which encroached upon civil liberties and turned Britain into a police state.

"One enduring legacy of the Blair era will be the massive increase in surveillance and diminution of civil liberties," said Elliot.

A report by the government's privacy watchdog said last year that Britain was becoming a "Big Brother" society where the lives of millions were monitored and tracked from cradle to grave.

A 2006 document by the British Education Ministry has recommended lecturers and university staff spy on Muslim students on suspicious involvement in "extremist" activities.

"The price is internal surveillance to an unprecedented degree... there has not been this degree of penetration of our society by forces hostile to the state since Sir Francis Walsingham was pursuing Catholic plotters in the 16th century," Dame Pauline, former chair of the British Joint Intelligence Committee (JIC), told The Independent.

"We are about at the acceptable limit of restraints on freedom of speech and association, such as the restrictions on demos near Parliament, and the curtailment of habeas corpus."

Blair is also leaving a weak Labour, bequeathing his successor a tough task in reviving support for the party after it suffered losses in regional elections across Britain.

The biggest embarrassment came in Scotland, where the Scottish National Party (SNP), which wants a referendum on independence, is holding talks to try to build a coalition government with smaller parties.

Their one-seat victory over Labour pushed Blair's party into a second place in its traditional heartland for the first time since 1955.

Experts said the results have been seen as a protest against both Blair and his likely successor, prickly finance minister Gordon Brown, who has been waiting impatiently in the wings for years.

"Tuesday will be a celebration that that threat has cleared. The darkness that followed hard behind will hang heavily over Britain long after Blair has gone," said The Independent.