Protestant Prime Minister Tony Blair is due to meet Pope Benedict XVI before he leaves office next week in what media say involves his preparations for converting to Roman Catholicism. 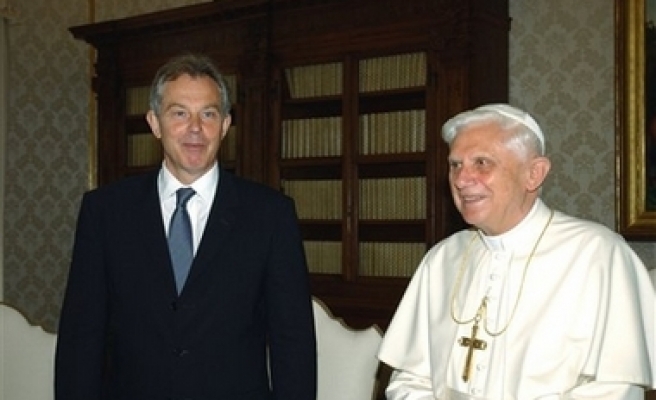 Protestant Prime Minister Tony Blair is due to meet Pope Benedict XVI before he leaves office next week in what media say involves his preparations for converting to Roman Catholicism.

Blair, an Anglican in a country that has never had a Catholic premier, has triggered intense interest about his personal and professional plans for the future, including whether he will serve as a Middle East peace envoy.

But officials accompanying Blair to the European Union (EU) summit in Brussels deflected questions about reports of his imminent religious conversion or appointment as peace envoy.

On the issue of religious convictions, his official spokesman said: "There are matters of personal belief that I don't deal with. That's not my job."

Informed sources quoted by The Guardian newspaper said Blair has already taken his decision to convert, and it was just a matter of when he will announce it, though he will not do so during his visit with the pope.

Blair's spokesman, who declined to give the exact date of the visit, said the prime minister and the pope will discuss "interfaith issues" as well as problems in the Middle East.

Blair has long denied persistent speculation about his faith, fuelled by his regularly attending mass with his devout Catholic wife Cherie and their four children at Chequers, the country retreat of British prime ministers.

The Guardian's sources said Blair was prepared for his conversion by a Royal Air Force chaplain, Father John Walsh, who for the past four years has been visiting Chequers quietly to give mass for the family on Saturday evenings.

The conversion could take place before or after Blair leaves office on June 27, the date he hands over to finance minister Gordon Brown, they said.

The Daily Telegraph, quoting church sources and friends of the prime minister, said Blair is planning to announce that he will convert to Roman Catholicism soon after he meets the pope.

There has never been a Catholic prime minister in Britain, although there is no longer a constitutional barrier, the newspaper said.

However, the Telegraph suggested Blair may have been reluctant to convert during his 10-year tenure of office for fear of a potential conflict with his role in appointing Anglican bishops.

He may have also been wary of doing so while playing a key mediating role in the Northern Ireland peace process between the province's Catholic and Protestant communities.

Three years ago Roman Catholic priest Timothy Russ, whose parish includes Chequers, disclosed that Blair had asked him for advice on switching churches.

But Russ, according to the Telegraph, said Blair had "some way to go" on important moral issues because his views on abortion, stem cell research and other issues are at odds with traditional Church teachings.

In his last months in office, Blair has steadfastly defended Britain's role in Iraq against mounting public opposition while listing efforts to resolve the Palestinian-Israeli conflict as a top priority.

Such an interest in peacemaking is the backdrop to reports he may become the top envoy for the diplomatic quartet on the Middle East -- reports that the White House has refused to deny or confirm.

Washington says it wants an envoy to develop new, state-forming institutions for the Palestinians, and that the Middle East quartet -- the EU, Russia, United Nations and United States -- agreed it needs a new representative.

In Brussels, a British official, speaking on condition of anonymity, said Friday he is not expecting an announcement on suggestions Blair could become a Middle East envoy.

"There may not be an announcement for six months, 12 months. It's that nebulous," he said.