Gordon Brown took over as British prime minister while Tony Blair left Buckingham Palace after tendering his resignation with the queen Wednesday. 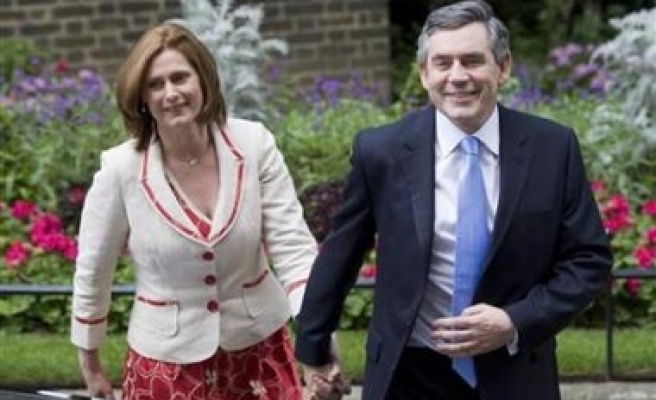 Tony Blair left Buckingham Palace after tendering his resignation with the queen Wednesday, ending his 10-year reign as prime minister of the UK.

Blair declared in May that he would step down today and hand over power to his long-time political partner and rival Gordon Brown, the Chancellor of the Exchequer.

Blair was later expected to confirm his decision to quit entirely as a Member of Parliament at a local Labour Party meeting in his constituency of Sedgefield, north east England, and announce that he was taking up the role of peace envoy to the Middle East.

His new mandate has nearly been agreed by the so-called Middle East Quartet, comprising the United Nations, the European Union, the United States and Russia.

Before he met Queen Elizabeth II, Blair made his final appearance as the prime minister in the lower house of Parliament, where he responded to as many tributes as he did challenging questions.

"Britain fights against people to destroy our way of life"

Blair opened his last Prime Minister's Questions by expressing condolences to the families of the fallen in Iraq and Afghanistan.

"I am truly sorry about the dangers that they face today in Iraq and Afghanistan," Blair said.

Blair used the last chance to justify his decision to follow the U.S. into Iraq, which had prompted the most criticism of his leadership.

"I know some may think that they (the British armed forces) face these dangers in vain. I don't and I never will. I believe they are fighting for the security of this country and the wider world against people who would destroy our way of life," he said.

However, Gordon Brown took over as British prime minister Wednesday, a culmination of his decade's long quest for the top job.

Brown was summoned by Queen Elizabeth II to a private audience at her official residence, Buckingham Palace, where he was formally confirmed as the new leader shortly after Tony Blair tendered his resignation.

In a largely ceremonial procedure, Brown sought permission from the queen to form a new government as the leader of the ruling Labour Party.

Upon leaving the treasury headquarters, where he has been in office for 10 years as the Chancellor of the Exchequer, Brown made no statement to the media.

Brown was appointed as finance minister in 1997 after the Labour Party won the general election, sending Blair to No.10 Downing Street.

After meeting the queen, Brown will return to No.10, the official residence of British prime minister, where his family already live in the private quarters. Meanwhile Blair's family have moved next door to No. 11, Brown's former official residence.

Removal men were seen packing furniture and boxes into a van outside No.10 earlier Wednesday, preparing for the leadership transfer.

Brown was endorsed as the new leader of the Labour Party Sunday after Blair announced in May that he would step down Wednesday. Last Mod: 27 Haziran 2007, 20:02
Add Comment