British anti-war campaigners led protests outside Downing Street Wednesday as they used Prime Minister Tony Blair's departure to highlight what they feel is his true "legacy," the organizers said. 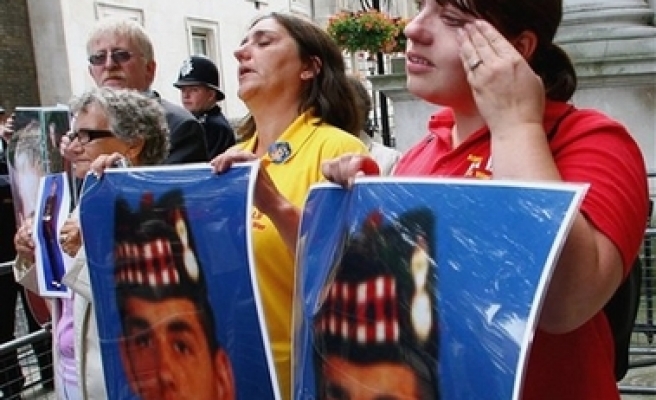 British anti-war campaigners led protests outside Downing Street Wednesday as they used Prime Minister Tony Blair's departure to highlight what they feel is his true "legacy," the organizers said.

The demonstrators, including many relatives of soldiers killed in Iraq, shouted slogans and waved placards as the Prime Minister prepared to leave.

Most were kept outside the gates of Downing Street but a handful, including veteran campaigner Mrs Rose Gentle, whose son Gordon was killed in Basra three years ago tomorrow, were allowed closer to the front door.

It is believed to be one of the first times that such protesters have been allowed to demonstrate inside Downing Street since new public order legislation was brought in.
Mrs Gentle and the mother of a serving Iraq soldier held pictures of military men killed in Iraq as they shouted towards 10 Downing Street.

At one point, police officers had to ask them to come down from a window ledge from which they screamed for the Prime Minister to leave the building and speak to them.
As they made their protest, growing numbers of demonstrators gathered outside the gates of the famous road in central London.

Outside Downing Street, before Blairs departure, an anti-war protester attempted to lie down in front of the main security gates.

Miss Miranda Dunn, 44, from north London, continually screamed about dead soldiers in Iraq before she was pulled away by police, the police said.

Meanwhile, the "Stop the War" coalition said they have written a letter to Blairs successor Gordon Brown seeking a meeting with the new Prime Minister which they hope will be handed into Downing Street today.

Miss Lindsay German, spokeswoman for the group, told reporters she did not have much hope that Brown would change the Iraq policy. "I feel Brown has the same attitude to the war," she said.

"What we want is for them to admit that they have created a terrible situation in Iraq and indeed in Afghanistan. What we need is to look for a solution," Miss German added.