A blind British pilot landed his microlight aircraft in Sydney Monday to complete a record-breaking flight halfway around the world. 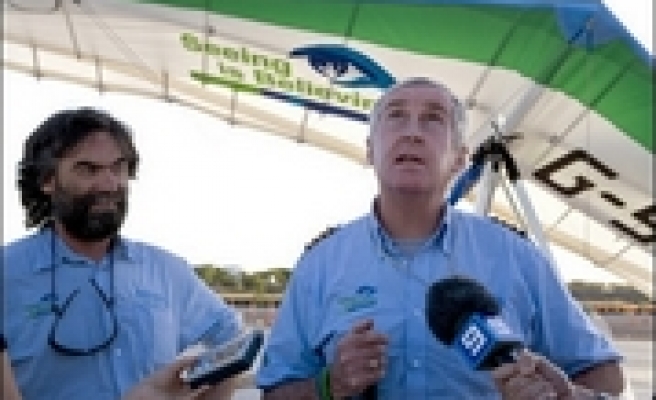 "It's the fulfillment of an amazing dream," the 58-year-old adventurer said after touching down at Sydney's Bankstown airport. "I've been wanting to do this flight for about four years."

Hilton-Barber flies with a sighted co-pilot but relies on speech output from his navigation instruments to steer his course, directing the plane from a wireless keyboard.

"I've wanted to be a pilot since I was a kid. Now I'm totally blind and I've had the privilege of flying more than halfway around the world. The big deal is not me doing this, it's raising funds," he said.

Hilton-Barber, who has been blind for 25 years, hopes the trip will raise some two million US dollars for the charity Seeing is Believing, which works to cut the incidence of preventable blindness in developing countries.

In 1999 Hilton-Barber completed the "Toughest Foot-race on Earth" -- 250 kilometres across the Sahara Desert -- before running in the "Coldest Marathon on Earth", the Siberian Ice Marathon.

He has climbed Mt Kilimanjaro and Mt Blanc, Africa and Europe's highest mountains, and set the Malaysian Grand Prix lap record for a blind driver in a 200 kilometre per hour Lotus.

On his arrival in Darwin in northern Australia last week, Hilton-Barber described the sensation of flying his aircraft.

"It's a very primitive form of flying but for a blind man it's wonderful because it is very sensual," he said.

"You can smell the smells coming up from the ground and I can feel the temperature, the wind, the cold."

The father of three encountered extreme weather systems during the flight, he said in Darwin.

"Over the Lebanese mountains at 13,000 feet (4,000 metres) we got caught in a very bad, freaky snowstorm. We had ice all over the plane and icicles on our suits."

At the other extreme, bad thermal weather in the desert over Saudi Arabia suddenly catapulted his machine upwards "like getting in a lift and going up three floors in a second."

"When you've got one little seatbelt on that's quite scary," he said.