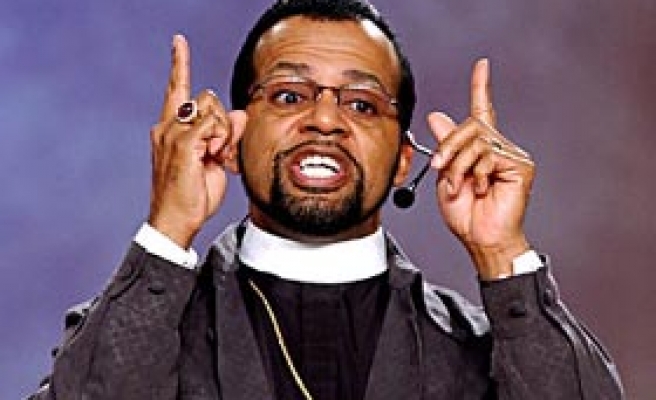 "You meet white evangelicals from America, they behave like Africans. They are vibrant, everything is done with vigor."

Pentecostalism, a movement within Evangelical Christianity that places special emphasis on the direct personal experience of God, is fast taking over Africa.

Pentecostals and Charismatics now account for 147 million Africans, 17 percent of Africa's people, compared with 5 percent in 1970, according to the World Christian Database.

A third of South Africa's urban population are Pentecostals.

Politicians, including Zimbabwe's President Robert Mugabe and Ghana's former president Gerry Rawlings, contributed to the rise of Pentecostalism by welcoming foreign evangelists, especially from the US.

Last year, one million Kenyans -- nearly one in 30 -- attended a service by American preacher T. D. Jakes in Nairobi.

Nigeria, with 130 million people, is full of barn-like buildings with names like the "Mountain of Fire and Miracles", drawing a million or more worshippers for all-day prayer.

Leaders of the US religious right such as Sam Brownback, a Republican presidential candidate, have encouraged Africa missions, citing Biblical reasons.

His white suit picked out by floodlights, the US-based preacher promised a "miracle crusade" to heal the sick, make the blind see and the lame walk.

For Pentecostals, the Holy Spirit plays an active role in life, performing miracles and answering prayers.

This appeals greatly to Africans who are beset by poverty and sickness.

"I want the power of the Lord to descend on me and lift me out of this chair," said John Wilson, a 58-year-old Ugandan who broke his spine in a car accident.

Pentecostal churches started booming in the 1980s in Africa after the continent suffered a severe economic decline.

"In the 1980s, our country started having serious problems," said Abbot Justin Bile, from St. Joseph's in the Democratic Republic of the Congo, a nation ruined by kleptocracy and war.

"The suffering of the population pushed them to seek material solutions.

"If there's a pastor promising a visa, job, or marriage, people flock to them," he said.

"The success of Pentecostalism is the focus on people's problems in this life," said Allan Anderson, Professor of Global Pentecostal Studies at England's Birmingham University.

"In countries where people are living on the breadline, Pentecostalism gives hope."

The increasing Christian missionaries have alarmed many African countries.

In 2005, Algeria passed a law making it a criminal offence to convert Muslims to another faith.