Haris Silajdzic, the Muslim member of the country's three-man inter-ethnic presidency, called on Serbia to arrest the main perpetrators of the Srebrenica atrocity. 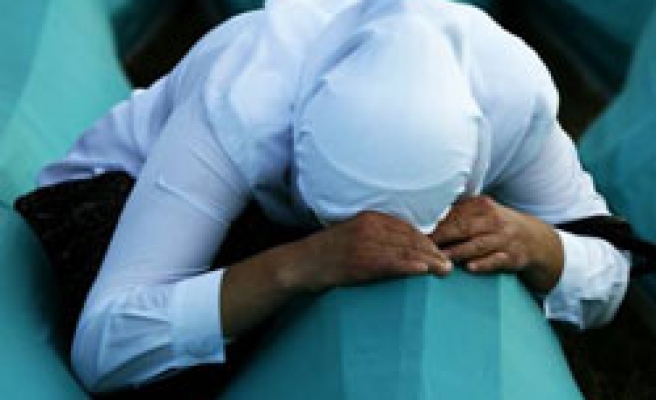 Relatives finally got the chance on Friday to bury 308 Bosnian Muslim men killed by Bosnian Serbs in Srebrenica thirteen years ago.

The relatives, most of them women, knelt by the coffins and prayed wordlessly, palms turned upwards, according to Bosnian Muslim custom. The coffins, wrapped in green cloth, were neatly lined up on a grassy field under the noon sun.

There is enough room here for all 8,000 victims of the 1995 massacre but more than a third are still missing, their bones lying in undiscovered mass graves, or in bags and boxes in a lab, awaiting identification.

The mass burial of newly identified victims, once a year on the anniversary of Srebrenica's fall in the last months of the 1992-95 war, has become a central part of Bosnian Muslim identity, a chance for remembrance and family reunions.

The air is filled with sobs, greetings and the smell of thyme.

"This day is even more difficult for me because I have found the body of one of my children but I cannot bury him," said Hatidza Mehmedovic, 56, who lost her husband and two sons.

The body of one son was found in 1998 but partially identified only last year. DNA analysis however cannot show which one of the two it is. Only three bones have been found of her husband's body.

"This is taking too long, I don't want to die without finding the truth."

The massacre started on July 11, 1995, when U.N. troops protecting Srebrenica during a 3-year siege stepped aside and allowed Bosnian Serbs to take over, separate the town's men and boys and stage a week-long killing spree.

The bodies were first buried in mass graves, then dug out with bulldozers and moved to smaller graves to hide the crime. A victim's remains can be scattered in several locations, and are not released for burial until two-thirds of the body have been recovered.

"The bodies of these 308 people have been found in as many as 55 different locations," said Amor Masovic, the member of the Commission for Missing Persons. "Some of them had been found in the ground nearly 13 years ago."

"Genocide occurred here. This fact cannot be minimised, it cannot be evaded and cannot and must not be denied," said U.S. Ambassador in Bosnia Charles English.

The relatives of the victims feel the world has forgotten Srebrenica.

The architects of the massacre, Bosnian Serb leader Radovan Karadzic and his military chief Ratko Mladic are still on the run, indicted by the war crimes tribunal in The Hague but protected by hardline nationalists.

Haris Silajdzic, the Muslim member of the country's three-man inter-ethnic presidency, called on Serbia to arrest the main perpetrators of the Srebrenica atrocity.

"We expect Serbia...to arrest as soon as possible and hand over all those who took part in the genocide project," he said.

Russia, an ally of Serbia, wants to see the Hague tribunal closed down soon, and a Dutch court threw out this week a suit by Srebrenica survivors against the United Nations for failing to prevent the massacre.

"The U.N. will never acknowledge their mistake, even though the crime happened on their watch, before the eyes of the world," said 36-year old Hafiza Klepic, who came from Denmark to bury the remains of her husband.

She buried her brother last year, and is still waiting for her father to be found.

"But we will not give up, justice must be done, If it doesn't happen on this earth, then God will be the judge."