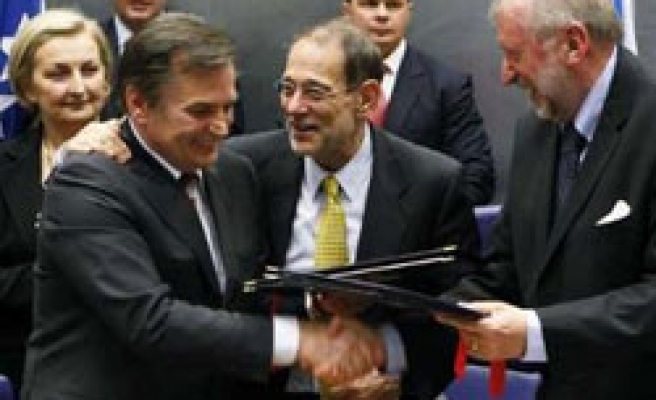 Bosnia signed a pact with the European Union on Monday that is the first step towards eventual EU membership, nearly 13 years after the end of its civil war.

Its leaders said they hoped the signing of the Stabilisation and Association Agreement in Luxembourg would help bury the past and bring in a new period of stability and prosperity.

Aside from newly created Kosovo, Bosnia was the only country in the Balkans not to have reached this stage after Serbia signed its own long-delayed SAA on April 29.

"This is a great day for the people of Bosnia-Herzegovina. You have achieved part of the dream," EU foreign policy chief Javier Solana said after the signing ceremony.

"This relationship is not for today, it is for ever."

"By signing the SAA, Bosnia and Herzegovina has shown that whatever was happening in the 1990s ... is now completely done away with," he told a joint news conference with Solana.

Bosnian Prime Minister Nikola Spiric vowed Bosnia would meet EU conditions for deepening ties and looked to a future that would offer Bosnians better jobs, living standards and an end to visa restrictions.

EU Enlargement Commissioner Olli Rehn cautioned that much work lay ahead. "Laws must be passed and institutions strengthened ... There is no time to waste. It is important to build up a genuine consensus on EU-related reforms."

Miroslav Lajcak, international High Representative and EU Special Representative in Bosnia, told reporters Bosnia's ability to implement reforms would determine how long it would take to join the bloc.

Lajcak said polls showed support for future EU membership among Bosnians was extremely high, but that challenges had to be overcome, including the country's complex constitutional structure and a history of playing the nationalist card as a route to electoral victory.

Silajdzic said Bosnia would be a constructive EU member. "What can Bosnia-Herzegovina offer the European Union? I believe we have human resources and especially in the energy sector resources that can help solve the European problem," he said.

Bosnia's two autonomous regions, the Muslim-Croat federation and the Serb Republic, have coexisted in an uneasy alliance since the end of the 1992-95 war, but have strugged to agree on key reforms demanded by the EU as prerequisites for closer ties.