Thousands of Bosnian Muslims have attended the burial of almost 100 of their ethnic kin killed by Bosnian Serb paramilitaries at the outbreak of the 1992-95 war. 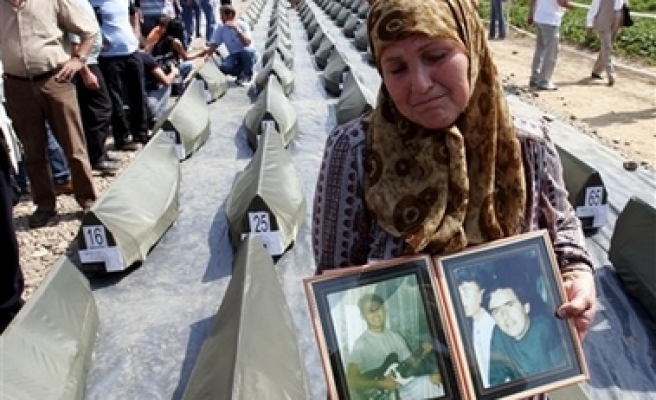 Thousands of Bosnian Muslims have attended the burial of almost 100 of their ethnic kin killed by Bosnian Serb paramilitaries at the outbreak of the 1992-95 war.

Mourners gathered amid heavy security near a newly renovated mosque in the town of Bratunac on Saturday after strong opposition by the Serbs who initially opposed the burial.

Muslim religious and political figures and family members, relatives and friends carried 94 coffins draped in green cloth to the final resting places of the victims.

The victim's bodies were found in several mass graves and among those buried were about a dozen women and children.

"We are sad but at least both we and them can now have some peace because their bodies have been found and we now have a place to go and pray for them," Hajrudin Memisevic, who buried his brother and nephew, said.

The mosque's imam, killed in 1992, will be buried on Sunday in front of the mosque.

About 600 Bosnian Muslims were killed after Serbs captured the eastern town in a campaign of "ethnic cleansing".

Before the war, Bratunac was home to about 25,000 Muslims, a two-thirds majority. More than 400 bodies are still missing.

Now Serbs make up the overwhelming majority in the town. A further 2,000 were killed in nearby Srebrenica after fleeing to the UN "safe area" which was later overrun.

In Bratunac, Serb forces detained thousands of Muslim males in May 1992 and kept them in a school and at the soccer ground. Memisevic said his brother was executed on May 11.

Only one person, Miroslav Deronjic, Bratunac's municipal board president, has been convicted for the crimes in the area.

He pleaded guilty and was sentenced by the UN war crimes court to 10 years in prison for the May 8, 1992, attack on neighbouring Glogova village in which 65 civilians were killed.

The Serbs, backed by the former Yugoslav army and Serbian paramilitaries, launched in 1992 an "ethnic cleansing" campaign that captured two-thirds of Bosnia and killed and expelled hundreds of thousands of non-Serbs.

Bratunac, like Srebrenica and most of eastern Bosnia - where Muslims were mainly in a majority before the war - is now in the Serb Republic.

Very few Muslims have returned to live there.

People like Sadija Hasanovic, who lost two sons whose bodies have not been found, are afraid to go back.

Hundreds of Bratunac's Serbs protested several weeks ago against the original burial plan.

The row was defused after an intervention by Milorad Dodik, the Serb Republic's prime minister, and the Muslims' acceptance of the new location. Last Mod: 13 Mayıs 2007, 13:58
Add Comment