Boston Mosque Opens in the end

This weekend's opening of the largest mosque in New England attracted more than 2,000 worshippers to the site, where they watched the crowning stroke — a 5,000-pound copper minaret cap hoisted onto its resting place atop the $14 million mosque. 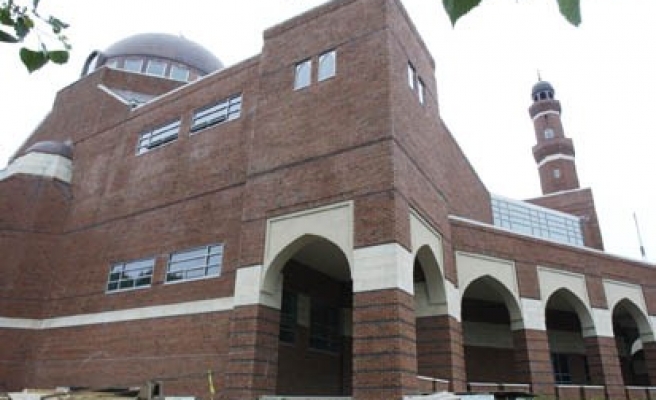 This weekend's opening of the largest mosque in New England attracted more than 2,000 worshippers to the site, where they watched the crowning stroke — a 5,000-pound copper minaret cap hoisted onto its resting place atop the $14 million mosque.

The mosque took two decades to make, and has stumbled in lawsuits, negative media and parched funding along the way.

The Islamic Society of Boston bought the Roxbury property for $175,000 in 2003, and as part of the deal, included benefits of environmental cleanup, contributions to the Roxbury Community College library and maintenance of Jeep Jones Park next to the mosque.

The property's assessed price tag was $401,000. In October 2004, the Boston Herald ran a series of articles that raised questions about whether the funding for the mosque came from dubious sources.

Bilal Kaleem, executive director of Boston's Muslim American Society, said the source in question — the Islamic Development Bank — was "a respectable, international institution that works with the United Nations and USAID on various projects." The Islamic Society of Boston fired back at the media in 2005 with a defamation lawsuit.

Meanwhile, the mosque project drew fire from residents. Boston resident and community activist James Policastro said the sale raised red flags. "This particular deal had an aspect that advanced a particular religion at the expense of the taxpayers of Boston," he said.

Policastro decided to take action and filed a lawsuit against the Boston Redevelopment Authority and the Islamic Society of Boston on the grounds that the sale breached the division between church and state. A judge dismissed Policastro's case.

The Islamic Society of Boston says the sale should never have been in question in the first place. Kaleem says at least 15 other organizations, many of them Christian and Jewish, have cut similar deals with the city. He believes this particular deal may have drawn critics because it was the first Muslim organization involved with such a deal.

The entangled web of disputes was wiped away about two weeks ago, when Policastro and the Islamic Society of Boston agreed to drop their respective lawsuits, ushering in the near completion of the mosque exterior.

When it's finished, the 70,000-square-foot mosque will accommodate 2,500 worshipers. For the people who gathered to celebrate the minaret capping, the occasion was momentous.

"The settlement was achieved a couple weeks ago," Kaleem said, "but it didn't hit home until I saw the 5,000-pound cap of the minaret coming down slowly with thousands of people praying and crying. It was beautiful, emotional, and a time of great thankfulness."

The Islamic Society of Boston says the mosque will serve as a cultural center as part of a greater vision for interreligious dialogue. The center will offer a library equipped with literature on Islam, as well as lectures and funeral services for the community.

In a symbolic move, the Islamic Society of Boston built the center on 1 Malcolm X Blvd. "The location is symbolic of a transformation we are hoping to achieve," Kaleem said. "We want to make this center an integral part of Boston society."

Members of the Muslim community in Boston are already well integrated into American life — there were far more men in blue jeans and T-shirts than traditional Middle Eastern garb at this weekend's ceremony.

It also appears the mosque is already doing its part to draw in members of the community. Policastro was among the people in the crowd. He said it was a beautiful ceremony.