Up until the age of about 11, airway "hyper-reactivity" decreased in both boys and girls and the average twitchiness was about the same in both sexes. 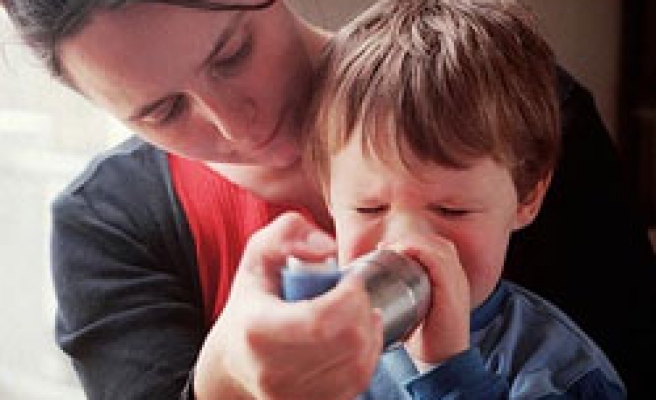 Boys may be more likely than girls to have childhood asthma, but they are also more likely to grow out of it during adolescence, a new study shows.

Results of the study released Friday help solve the mystery of age and sex differences in the natural history of childhood asthma, the lead researcher told Reuters Health.

"Persistence of airway responsiveness -- commonly referred to as twitchy airways -- is a major reason why asthma in girls may persist (or develop) past the onset of puberty," Dr. Kelan G. Tantisira, of Brigham and Women's Hospital and Harvard Medical School in Boston, told Reuters Health.

In addition to symptoms, twitchy or over-reactive airways are one useful marker for the development of asthma. Upon exposure to certain asthma triggers like pollen, dog or cat dander, cold air or histamine, an asthmatic's airways are much more likely to constrict than those of a person without asthma.

Tantisira's team studied the natural history of airway responsiveness in 1,041 children with mild to moderate asthma who were between 5 and 12 years old at the outset. They conducted standard "methacholine challenge" tests for twitchy airways annually over a period of nearly nine years.

Results showed that up until the age of about 11, airway "hyper-reactivity" decreased in both boys and girls and the average twitchiness was about the same in both sexes.

However, starting around puberty, the level of airway hyper-reactivity remained fairly constant in girls and was more severe relative to that seen in boys.

This is a "fascinating finding," Dr. Jorrit Gerritsen, of Beatrix Children's Hospital in Groningen, the Netherlands, writes in a commentary published with the study in the American Journal of Respiratory and Critical Care Medicine.

According to Tantisira, it had been unclear why pre- and post-puberty asthma incidence shows different patterns in girls and boys -- and why the disease seems more likely to remit in boys than girls.

Now it appears that the difference is related to the persistence of, or increased susceptibility to, airway responsiveness in girls, Tantisira explained. Boys, in contrast, show an improvement as they get older.

Why twitchy airways persist in girls is not known, but may be related to hormonal factors, the researcher said, noting that progesterone, which increases in girls during puberty, has been shown to make airways less likely to "bronchodilate," or open up.

Similarly, hormonal supplementation in postmenopausal women has been shown to increase the incidence of asthma. On the other hand, testosterone, which is increased in boys during puberty, has been associated with smooth muscle relaxation in animal research.

"It is possible in the future," Tantisira said, "that therapy may be developed that would be directed toward the mechanistic basis for persistence of airway responsiveness. This may include airway specific hormonal modulation or therapy directed at sex-specific genetic determinants of asthma (and) airway responsiveness."

"Obviously," the researcher added, "much work still needs to be done."