Brazilian police killed 18 suspected gangsters during five hours of gunbattles in a Rio de Janeiro slum in a show of force before next month’s Pan American Games, a security official said. 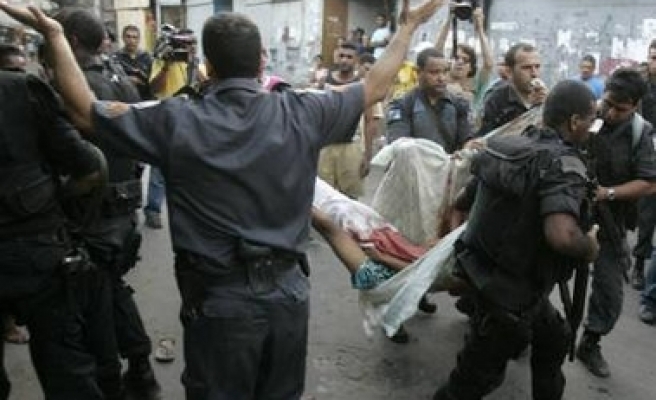 Brazilian police killed 18 suspected gangsters during five hours of gunbattles in a Rio de Janeiro slum on Wednesday in a show of force before next month’s Pan American Games, a security official said.

More than 1,000 policemen backed by armored cars had invaded the Alemao slum, or favela, in a raid aimed at arresting drug traffickers and seizing drugs and weapons.

A state security spokesman said police killed 18 suspects during the fighting. Ten other people were wounded, including a policeman. It was unclear if the wounded included bystanders hit by stray bullets.

It was a particularly bloody day even by Rio’s standards and the violence reinforced concerns about public security during the Pan American Games, which start on July 13.

Rio, the sixth-largest city in the Westerm Hemisphere, will host 5,500 athletes from across the Americas as well as an estimated 800,000 tourists. It is also a venue for the global series of Live Earth rock concerts on July 7.

Officials hope the events will showcase the city’s legendary charms instead of exposing its out-of-control crime.

About 1,200 state policemen backed by 150 troopers from a special national force took part in Wednesday’s raid.

Many shops shut their doors and parents rushed to take schoolchildren home after the gunfire started.

Police withdrew after about five hours but two squads needed to be rescued by other units after they were pinned down. State Security Secretary Jose Mariano Beltrame said operations would continue.

Many of the favelas in the city of 11 million people are controlled by drug gangs and police often only enter in military-style invasions.

Rio has one of the highest murder rates in the world, with a toll comparable to some war zones. At least 1,800 people were been killed in the first four months of 2007 in the metropolitan area, official figures show.