UK FM Miliband was forced to apologize to parliament after it emerged two U.S. planes carrying "terrorism" suspects on rendition flights had landed on the British Indian Ocean island of Diego Garcia in 2002 despite previous government denials based on U.S 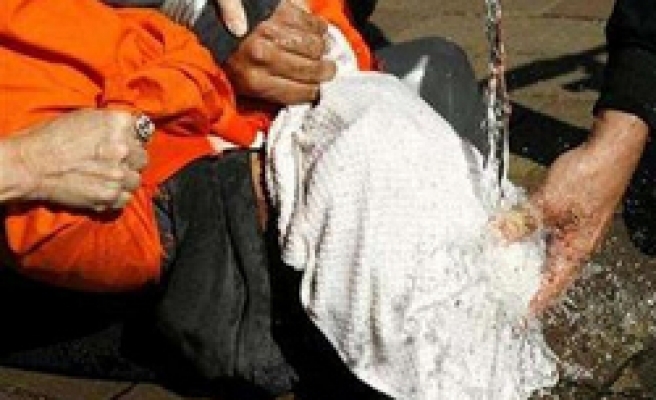 Britain should no longer rely on U.S. assurances that it does not use torture on "terrorism" suspects, an influential committee of MPs said in a report released on Sunday.

Britain had previously taken those assurances on face value but after the CIA acknowledged "waterboarding" three detainees, Britain should change its stance, the House of Commons Foreign Affairs Committee said in its annual report on human rights.

Foreign Secretary David Miliband told parliament in April he thought the technique, where a suspect is tied down on a board and water is poured over his or her hooded face in a form of simulated drowning, amounted to torture.

U.S. President George W. Bush vetoed legislation in March that would have banned the CIA from using the technique.

"Given the clear differences in definition, the UK can no longer rely on U.S. assurances that it does not use torture and we recommend that the government does not rely on such assurances in the future," the MPs said in their report.

Britain is a signatory to a U.N. convention barring the extradition of a person to another state where there are substantial grounds for believing that they would be in danger of being subjected to torture.

The Foreign Office declined to comment specifically on the issue of torture, saying only that it would respond in detail to the wide-ranging report at a later date.

In their report, the MPs also called for an exhaustive analysis of current U.S. interrogation techniques, using information publicly available or supplied by the U.S., to see if any other differences exist.

Britain had a moral and legal obligation to ensure its airports and airspace were not used for renditions -- the secret transfer of CIA prisoners, they said. This applied even if the rendition flights did not have a detainee on board.

Miliband was forced to apologize to parliament in February after it emerged two U.S. planes carrying "terrorism" suspects on rendition flights had landed and refuelled at a U.S. base on the British Indian Ocean island of Diego Garcia in 2002 despite previous government denials based on U.S. assurances.

Human rights groups had long cast doubt on those assurances and the MPs' report urged the government to press the United States to reveal "the full scale of the rendition problem."

It also called for an investigation into allegations that the government "outsourced" interrogation techniques involving the torture of British nationals by Pakistani authorities.

In April, The Guardian newspaper reported a number of British citizens who said that they were detained and tortured by Pakistan intelligence, and interrogated by British intelligence officers in that country, the committee said.

"It is not acceptable for the government to use an individual's dual nationality as an excuse to leave him or her vulnerable to the prospect of possible torture," the committee added. Britain has denied outsourcing torture.