Hundreds of protesters in the central Pakistani city of Multan chanted slogans against Britain accusing London of "provoking" Muslims by awarding a knighthood to Salman Rushdie. 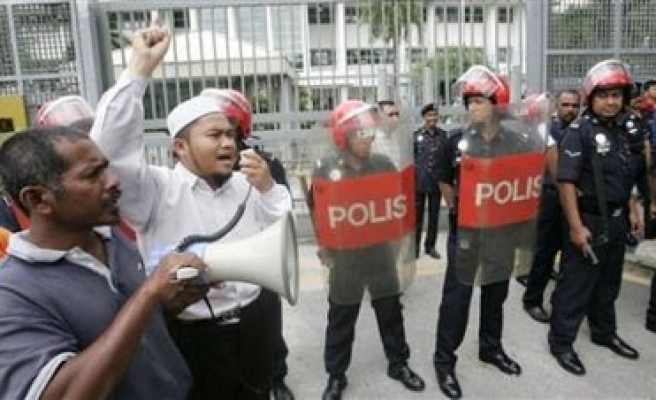 Hundreds of protesters in the central Pakistani city of Multan chanted slogans against Britain accusing London of "provoking" Muslims by awarding a knighthood to Salman Rushdie.

More than 150 traders gathered in the city's busy commercial district where they burned a British flag in anger at Britain bestowing the award to a "hated" man, the author of "blasphemous" book, witnesses said.

"Britain has tried to ignite the controversy of the cursed author Rushdie after more than a decade," leader of a local traders' body Akhtar Butt said. "It's a deliberate attempt to provoke Muslims."

Another rally attended by more than 100 students from religious schools in Multan condemned the award and torched an effigy of Rushdie in protest.

"By giving the title of 'Sir' to Rushdie, Britain has put the award into disrepute," said Hidayatullah Pasroori, a local leader of the Islamic party Jamiat Ulema Pakistan.

"The award to Rushdie hurls insult on those who won it in the past," he said.

The Jamiat Ulema Islam party staged a separate rally in the city against the award.

"We condemn the British government for awarding the title to a blasphemer. They have tried to deliberately hurt our feelings," local party leader Maulana Abdul Rauf said.

Pakistan said it had summoned British High Commissioner Robert Brinkley to its foreign office on Tuesday to lodge a complaint about the award for Rushdie.

Brinkley in a statement late Monday defended the award, saying it was "simply untrue that this knighthood is intended as an insult to Islam or the Prophet Mohammed."

They handed a one-page memorandum to the British envoy during the rare half-hour demonstration, which was watched by police with riot shields and helmets. The police contingent was about as large as the protest.

"In the name of peace and mutual respect, we demand that the award be withdrawn, and the British government distance itself from a provocateur like Salman Rushdie," party president Abdul Hadi Awang said in a statement.