Dozens of British Muslims gathered outside a mosque Friday to denounce the government's decision to honor author Salman Rushdie with a knighthood. 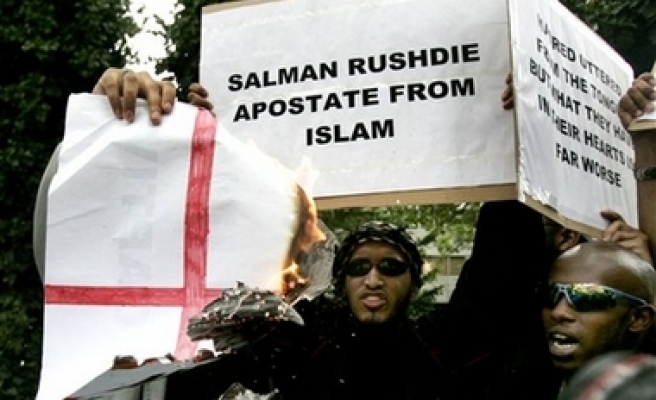 Dozens of British Muslims gathered outside a mosque Friday to denounce the government's decision to honor author Salman Rushdie with a knighthood.

The protesters in London addressed worshippers leaving prayers outside Regent's Park mosque. Gathered under a canopy of trees, the crowd of about 100 people listened to speeches demanding the death edict, or fatwa, be expedited.

Several chanted "Death to Rushdie! Death to the queen!" They carried placards, one reading: "Salman Rushdie should be punished, not praised." A picture of England's St. George's Cross flag painted on the back of a placard was burned.

Watching the protest, business student Abdullah Azzam said most British Muslims opposed Rushdie's knighthood. "The majority think it's wrong and believe that his book offends Islam," said Azzam, 23. "But a lot of people don't want to say that in public."

Protest organizer Anjem Choudray said demonstrations across Pakistan, Iran and Malaysia show the outcry will grow. "This knighthood is just another example of (Prime Minister) Tony Blair and his government's attempts to secularize Muslims and reward apostates," he said.

"Rushdie is a hate figure across the Muslim world," he said. "This honor will have ramifications here and across the world."

The Muslim Council of Britain wrote to mosques and Islamic groups urging Muslims to "face provocation with dignity and wisdom" in protesting the decision to honor Rushdie.

"We should not allow the situation to be inflamed in any way or be exploited by other unsavory groups so as to bring our community and our noble faith into disrepute," the letter said.