This was the horrific moment a British teacher was savaged by a lion - coming within inches of death. 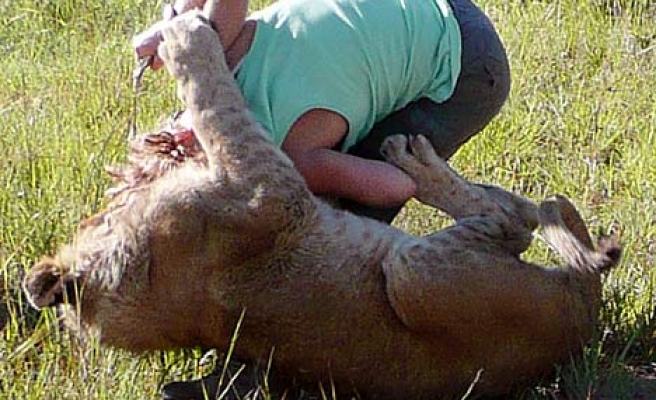 The big cat pounced on Kate Drew from behind and dragged her to the ground, sinking its teeth into the back of her neck.

As wardens on a Zimbabwe game reserve rushed to help, the 400lb lion kept the 28-year-old tourist firmly in its grip - but, mercifully, its jaws just missed her brain stem.

Seconds later, she was rescued, dripping with blood. The bite wounds left her needing 13 stitches.

Recalling the attack just over a month ago, Miss Drew, from Hornchurch, Essex, said she assumed she was a "goner" after the lion pounced.

As it held her down, she was even more terrified to glance up and see two more lions coming her way.

It is thought the lion intended only to "play" with her after being attracted by her mane-like long blonde hair.

The closeness of her brush with death sank in only after Miss Drew saw these photographs of the attack, taken by a fellow traveller.

"It brings back just what a crazy experience it was," she said.

"It's quite shocking to see a picture of it."

The primary school headmistress had been working as a volunteer teacher in Tanzania since last September and was spending a few weeks travelling across Africa on a bus with other backpackers.

As part of the trip, they visited a project where lions are bred to be released back into the wild.

Tourists can pay £24 to walk with several of the big cats, which are considered tame enough to be allowed contact with humans.

Miss Drew, who is now helping at an orphanage in Peru, said: "I was a bit apprehensive, but we were just leaving and everything seemed to have gone well - until this one lion jumped at me from behind.

"I was scared enough when he pinned me to the ground, but when I looked up and saw the other two, I really thought I'd had it. I thought, 'Oh my God, I'm a goner'."

She was saved only when the wardens rushed in with sticks and wrestled the animal away.