British mercenary Simon Mann was jailed for 34 years by a court in Equatorial Guinea on Monday for a failed 2004 coup plot in which he said former British Prime Minister Margaret Thatcher's son was also involved. 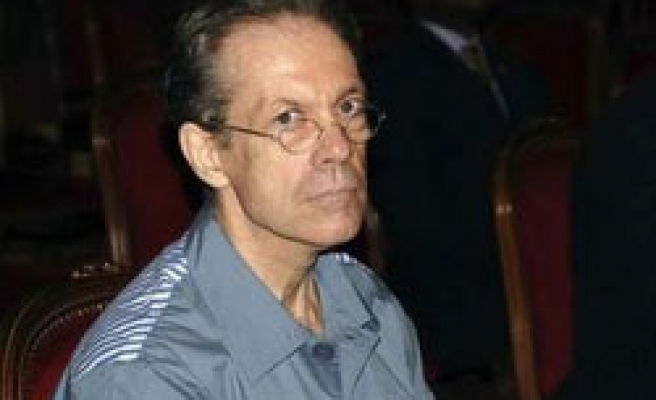 Mann, wearing a grey prison uniform, stood impassively as the sentence was read out by presiding judge Carlos Mangue in the heavily guarded courtroom in the capital Malabo.

His arrest four years ago by authorities in Zimbabwe, along with 70 other mercenaries en route to Equatorial Guinea aboard a plane, foiled the coup plan and ended the career of one of the last prominent "dogs of war" still active in Africa.

Mann's defence team can now either appeal against the sentence to the Supreme Court or directly apply for a pardon to President Obiang, who has ruled Equatorial Guinea since 1979.

"A pardon is ... a discretional thing by the president. He can do it or not as he chooses," public prosecutor Jose Olo Obono told Reuters.

The long jail sentence against the self-confessed mercenary was harsher than the just over 31 years originally requested by the prosecution during Mann's trial in Malabo last month.

Seeking leniency, Mann had apologised and portrayed himself as a pawn of powerful international businessmen he said were trying to seize power in Equatorial Guinea, sub-Saharan Africa's third-largest oil producer.

Judge Mangue said the long sentence was justified because of the seriousness of the crimes and the weight of evidence.

Describing himself as a mere "employee", Mann said the real masterminds behind the coup plot were business tycoons including London-based Lebanese millionaire Eli Calil and Mark Thatcher.

Both Calil and Thatcher have denied any role in the conspiracy.

But Mangue ordered the public prosecutor to seek to bring them to justice. The prosecutor said the government had circulated arrest warrants through the international police agency Interpol and would try to seek their extradition.

Calil told Britain's Daily Telegraph he supported only "democratic change" and that Mann had only himself to blame. Thatcher had "absolutely nothing to do" with a coup, Calil said in the interview in an early edition of Tuesday's paper.

Another defendant sentenced on Monday, Lebanese businessman Mohamed Salaam, received a jail term of 18 years, while four Equatorial Guinean nationals were given terms of 6 years each. Another was jailed for one year and one other was acquitted.

Mann was also ordered to pay a fine and compensation to the Equatorial Guinea state totalling around $24 million.

Fabian Nsue Nguema, a defence lawyer for six of the men tried alongside Mann, told Channel 4 News there had been "many gaps" in the judicial process.

Asked if it was normal for the main accused, Mann, to provide most of the evidence against himself, he said:

"They'll promise nothing will happen to you, the president is going to pardon you, and so on ... Was Mann cheated into telling the truth? We know that's what has happened."

Mann was sentenced on three counts: for making attempts against the life of Equatorial Guinea's president, against the government and against the peace and independence of the state.

He has been held at Malabo's Black Beach prison since he was extradited from Zimbabwe this year. He has said he is being well treated, lunching every day with Security Minister Manuel Nguema Mbo.

Mann had served a four-year sentence in Zimbabwe for illegal arms possession after being arrested there in 2004.

Thatcher, who Mann said was "part of the management team" behind the coup, was reported to be living in southen Spain, while Calil was spending his time between London and Lebanon.

Thatcher, arrested in 2004 in South Africa after he allegedly invested $350,000 to buy a helicopter to be used in the 2004 coup operation, said he thought he was funding an air ambulance service. He was freed after pleading guilty to breaking anti-mercenary laws and he paid a $450,000 fine.

During his trial in Malabo last month, Mann testified that the governments of Spain and South Africa had given a "green light" to the 2004 conspiracy, which had aimed to replace Obiang with exiled opposition leader Severo Moto. The Spanish and South African governments have denied Mann's allegations.