Brotherhood verdict delayed until after poll

An Egyptian military court postponed a verdict on Tuesday for 40 members of the opposition Muslim Brotherhood until after local council elections due next month, court officials and the Islamist group said. 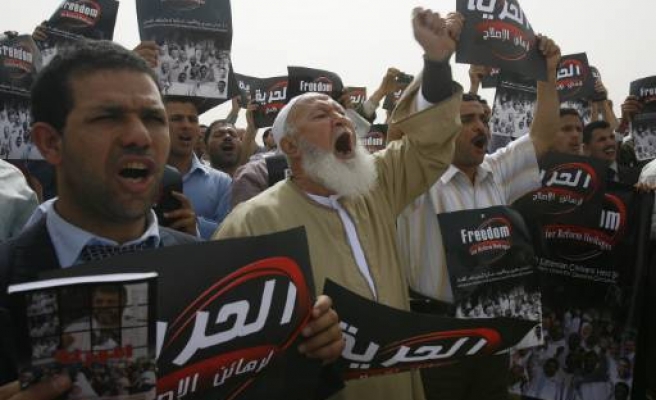 Brotherhood deputy leader Mohamed Habib told Reuters the ruling had been delayed to April 15 in what he described as a political move. It is the second time a ruling has been delayed.

Court officials confirmed a verdict was delayed for the men, including the group's third-in-command Khairat el-Shatir, on trial over charges of belonging to a banned group and having anti-government literature. "It (the government) doesn't want to fight multiple battles at the same time, and feels that the rulings would have a negative effect on its image on the societal level," Habib said.

He said that was true "especially as the whole world, whether in terms of public opinion or civil society, rejects in principle transferring civilians to military courts".

Members of the Brotherhood, Egypt's strongest opposition group, have not faced a military court since 2001.

The men in the case have already spent well over a year in jail, with the exception of six who are being tried in absentia.

Most of the serious charges initially brought against them, including terrorism and money laundering, were reported to have been dropped in December, leaving only lesser charges pending.

Local and international rights groups including Amnesty International have criticised the military trial as unfair. Egypt has barred independent observers from the court.

The verdict is now scheduled for after the April 8 council vote in which the Brotherhood is challenging Egypt's ruling National Democratic Party for seats.

The Brotherhood has accused the government of obstructing efforts to register for the vote, and hundreds of Brotherhood members have been detained since mid-February in the run-up to the election. The interior ministry has repeatedly declined to comment on the issue.

Seats on local councils could be important to the Brotherhood on a national level if it wants to field an independent candidate for a presidential run in the future.

Independent candidates for the presidency need endorsements from 140 members of local councils as well as support from members of both houses of parliament.

Egypt postponed local elections for two years in 2006 after the Brotherhood performed better than expected in a 2005 presidential vote.

The Muslim Brotherhood, which holds a fifth of the seats in the lower house of parliament through members elected as independents, seeks an Islamic state through democratic means. It operates openly despite a decades-old ban.