Brown: EU wants to see a freeze on Israel settlements 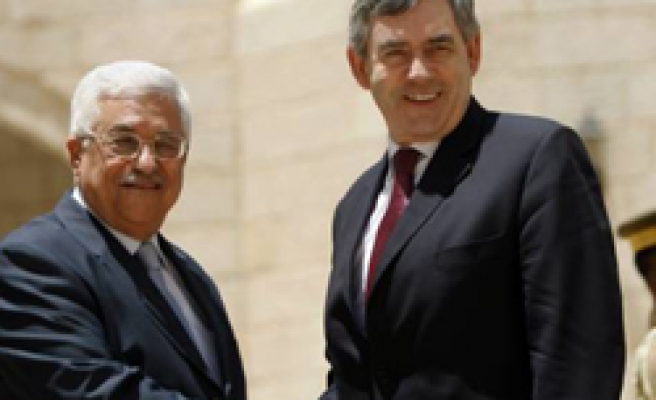 British Prime Minister Gordon Brown urged Israel on Sunday to stop settlement expansion on occupied land, saying it was making it harder to reach a peace deal with the Palestinians this year.

British officials said it included $30 million in direct budget support for President Mahmoud Abbas's government in the occupied West Bank, as well as funds to help train his security forces.

At a news conference with Abbas in the West Bank city of Bethlehem, Brown said Britain wanted Israel to freeze Jewish settlement building.

He said "I think the whole European Union is very clear on this matter: We want to see a freeze on settlements."

"Settlement expansion has made peace harder to achieve. It erodes trust. It heightens Palestinian suffering. It makes the compromises Israel will need to make for peace more difficult," he said.

Citing obstacles such as settlement building, Abbas said an agreement this year would require "a tremendous effort".

"I would urge all those who are part of the negotiations at the moment to seize this opportunity, ... to move the talks forward," said Brown.

At a meeting with Palestinian business leaders, the British leader urged Western donors to make good on their promises of financial support to the Palestinians.

"I believe that the Palestinian economy can become one of the most successful in the region," said Brown, who on Monday will become first British prime minister to address Israel's parliament.

His $60 million pledge will bring British support for the Palestinians to $175 million for 2008. Late last year, he pledged $500 million over three years.

Brown said he and Abbas agreed that Britain would host another investment conference in London later this year to follow up on pledges made at one in Bethlehem in May.

Ismail Haniyeh, who heads the Hamas government in Gaza, said Sunday that Brown should visit Gaza to see the humanitarian crisis caused by Israel's blockade of the territory, "unfortunately with the participation of several countries, including European countries and the British themselves."