Gordon Brown is planning to announce British troop withdrawals from Iraq during his first 100 days in power to boost his popularity in the opinion polls and Bush was warned of expected loss of main allly in US-led invasion in Iraq. 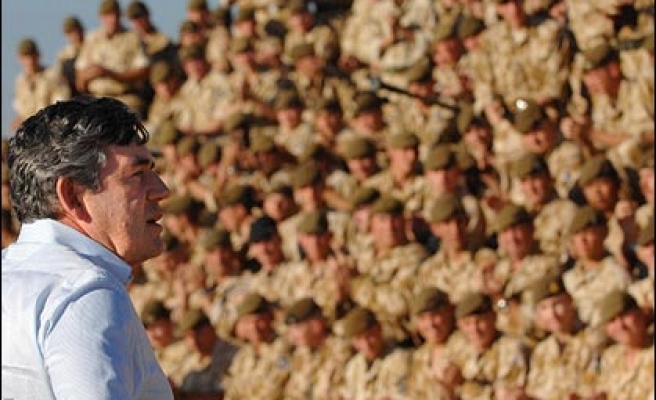 British Gordon Brown is planning to announce British troop withdrawals from Iraq during his first 100 days in power to boost his popularity in the opinion polls and Bush was warned of expected loss of Washington's main allly in US-led invasion in Iraq, Telegraph reported on Sunday.

Gordon Brown is prepared to risk the future of the "special relationship" with the United States by reversing Tony Blair's support for the Iraq war, President George W Bush has been warned.

He has been briefed by White House officials to expect an announcement on British troop withdrawals from Mr Brown during his first 100 days in power. It would be designed to boost the new prime minister's popularity in the opinion polls.

The President recently discussed with a senior White House adviser how to handle the fallout from the expected loss of Washington's main ally in Iraq.

Details of the talks came as a close ally of Mr Brown called for a quicker withdrawal of British troops. Nigel Griffiths, a former minister, said: "We should get out of Iraq as soon as is practicable. We should consult the Iraqi government - but they cannot have a veto. This cannot be delayed."

Mr Griffiths, who resigned as deputy leader of the Commons this year over the decision to replace the Trident nuclear weapons system, spoke out as reports suggested that Mr Brown would use an early trip to Iraq to reassess Britain's role and accelerate the withdrawal. Revelation of the US fears will reinforce expectations in Westminster that Mr Brown will make a decisive break with Mr Blair's support for the war.

During a surprise "farewell trip" to Iraq yesterday, Mr Blair suggested that his successor would continue his policy. Speaking shortly after a mortar attack by insurgents on Baghdad's fortified "green zone", the Prime Minister said: "I have no doubt at all that Britain will remain steadfast in its support for Iraq, for the Iraqi people and for the Iraqi government as it tries to make sure it overcomes the threat of "terrorism" and continues to make progress.

"The policy I pursue is one for the whole of the Government, so even when I leave government I am sure that support will continue."

However, it can be revealed that senior figures in the National Security Council, the Pentagon and the State Department in Washington have expressed fears about Mr Brown.

They believe that cordial relations between the two leaders will be "at an end" if the incoming premier plays "gesture politics" over Iraq.

One senior official said: "There is a sense of foreboding. We don't know if he will be there when we need him. We expect a gesture that will greatly weaken the United States government's position."

Mark Kirk, a Republican congressman who discussed Iraq policy at the White House last week, said: "The American view is that he's a much weaker political leader than Blair. There's the fear in Washington that he won't be as strong an ally."

President Bush's aides fear that Mr Brown will boost Democrats' demands for a timetable for a US pullout from Iraq and encourage wavering Republicans to defect - leaving the President more isolated.

Senator John Kerry, the Democratic presidential candidate in 2004 who sits on the Senate foreign affairs committee, said Mr Brown would support Democrats' calls for the Iraqi government to meet "benchmarks" for progress or for war funding to be cut off.

A source close to the Chancellor said last night: "These fears are unfounded. Gordon is a committed Atlanticist who wants to strengthen and deepen our ties with America around our shared values, and who wants to persuade the rest of Europe to work in closer co-operation with America."

The number of British troops in Iraq is being cut from 7,100 at the start of the year to 5,500 - but there is no official timetable for full-scale withdrawal.