At least two Buddhist monks were injured in a street clash in Cambodia's capital between two opposing groups of monks during a protest . 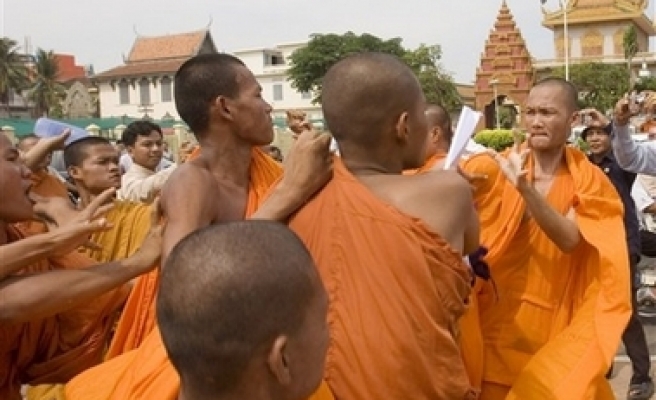 The demonstration march was made by some 40 monks, most of whom identified themselves as Khmer Krom, an ethnic Khmer minority people of Vietnam who inhabited the Mekong Delta area prior to the colonization of that area by Vietnamese settlers.

The marchers were demanding relief from alleged religious suppression of Khmer Krom by Vietnamese authorities, and had hoped to deliver a protest letter to the Vietnamese Embassy but were dispersed by some 150 riot police.

They then walked to the Royal Palace, where the clash occurred, and to the U.S. Embassy.

Marcher Lim Yuth, 23, his face bloody from a cut above his eye, said he was injured by an object thrown by a small group of Buddhist monks, still unidentified, during his group's peaceful march.

It was unclear whether the Buddhist monks who clashed with the marchers acted on their own or under orders from above.Khmers are the predominant ethnic group in Cambodia, accounting for approximately 90 percent of the country's 14 million people.

The area of southern Vietnam where as many as 1 million ethnic Khmer reside is known in Cambodia as Kampuchea Krom. It was once part of Cambodia's territory but was made part of Vietnam by French colonial authorities in 1949.

Kampuchea Krom organizations and communities based in the region and abroad have long accused Vietnam of mistreating its ethnic Khmer minority.