US President George W. Bush and NATO Secretary General Jaap de Hoop Scheffer were expected to hold talks at the president's Texas ranch Monday on fighting the Taliban in Afghanistan. 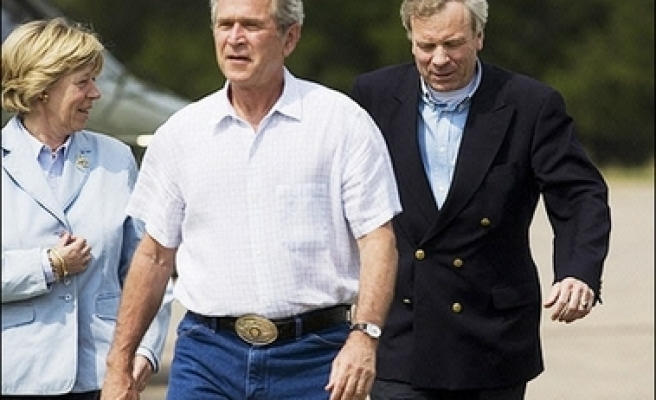 US President George W. Bush and NATO Secretary General Jaap de Hoop Scheffer were expected to hold talks at the president's Texas ranch Monday on fighting the Taliban in Afghanistan.

On Sunday, Bush drove a pickup truck to meet De Hoop Scheffer's helicopter as it landed at the sprawling ranch.

But two have topics to discuss, topped byTaliban fighters and civilian deaths in Afghanistan.

Bush is expected to seek reinforced allied commitments to participating in the US "war on terror" campaign in Afghanistan, if not Iraq.

Also likely on the agenda are Kosovo, expansion of the North Atlantic Treaty Organization, and the US effort to position a strategic anti-missile defense system in Europe, according to the White House.

"I wouldn't be surprised if those issues came up," said White House spokesman Tony Fratto.

Bush and the NATO diplomat were to have further meetings early Monday.

Afghanistan could dominate the discussions, due to the recent surge in attacks by Taliban forces and a spike in civilian deaths in the fighting.

About 37,000 NATO-led troops are in Afghanistan, including 15,000 US soldiers. Another 12,000 US soldiers operate separately under their own command in the country.

Bush wants allies to provide more manpower and equipment in Afghanistan and to lift restrictions some impose on their troops engaging in battle.

Concern about mounting civilian casualties has also focused on the increased use of air power by US and NATO troops.

Over the past month, Afghan officials reported 50 civilians killed in US air strikes in fighting in the western province in Herat, and another 21 in south central Helmand province.

The deaths have drawn criticism from Afghan President Hamid Karzai and sparked concerns among NATO members.

Another subject likely to come up is the future of Kosovo, where NATO peacekeeping troops have been based since 1999, and which is generating more tensions between the United States and Russia.

Fratto said that Rice will probably talk about her recent Moscow visit during dinner.