The US president has made a renewed bid to revive an immigration reform bill by offering an extra $4.4 bn to secure US borders. 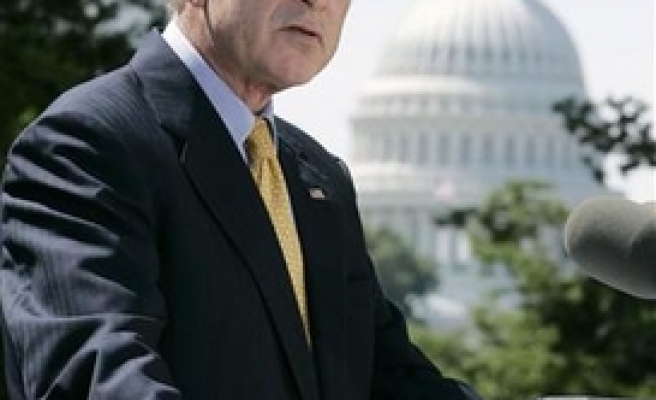 The US president has made a renewed bid to revive an immigration reform bill by offering an extra $4.4 bn to secure US borders.

The measure, denounced by many Republicans as conferring "amnesty" to illegal immigrants, was sidetracked a week ago but got the nod from senate leaders late on Thursday after George Bush's carrot.

The bill has generated intense controversy, especially the provisions for eventual citizenship for many of the estimated 12 million illegal immigrants now in the country.

The proposal is expected to be voted on next week.

Bush said the "$4.4 bn in immediate additional funding for securing our borders and enforcing our laws at the work site" will come from the fines collected from illegals caught entering the US.

Officials said Republican and Democratic supporters will be presenting suggested amendments for consideration by the senate's leaders, but the precise details were not disclosed.

Bush's decision to announce personally his support for the accelerated funding reflected worries expressed by Republican senators at a private meeting on Tuesday.

Several told him their constituents doubted the government was capable of following through on a commitment to enforce immigration laws.

"We're going to show the American people that the promises in this bill will be kept," Bush said.

Under the legislation as drafted, money for border enforcement would be collected gradually as illegal immigrants pay the fines and fees needed to achieve legal status.

Bush's attempt was met with a mixed reaction. Backers of the bill hope that the extra funding will prompt conservatives, under fierce pressure to oppose the measure in the 100-seat senate, to sign on.

But opponents say there is "simply no reason" to tie amnesty to the issue of enhancing border security, calling it a last-ditch attempt "to attract votes to a bad bill".

The legislation would grant a path to legal status to illegal immigrants, strengthen border enforcement and initiate a low wage guest worker programme.