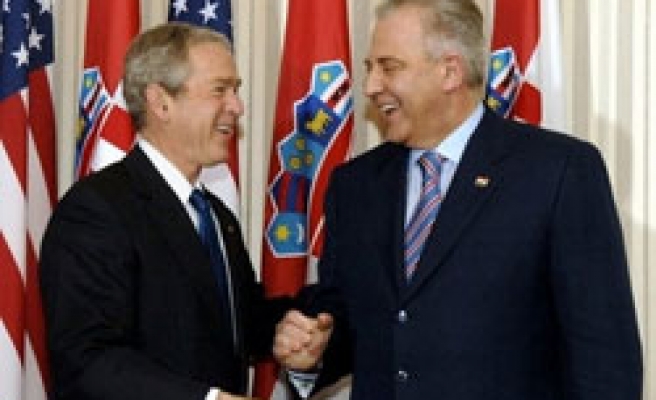 Bush congratulated the Eastern European nations of Croatia and Albania for the invitations to join NATO that they won this week at the military alliance's summit in Bucharest, Romania.

He urged a similar welcome for Macedonia, which snagged on Greek objections.

Bush called the invitation to join NATO "a vote of confidence that you will continue to make necessary reforms and become strong contributors to our great alliance."

'SHOULD ANY DANGER THREATEN YOUR PEOPLE, ABD AND NATO ..'

"Henceforth, should any danger threaten your people, America and the NATO alliance will stand with you and no one will be able to take your freedom away," he said to cheers from an audience of thousands packed into St. Mark's Square, used as the site of the inauguration of every Croatian leader for the past 700 years and considered "the center of Croatian politics."

BY EVENING, BUSH WAS TO BE AT SOCHI

By evening Saturday, Bush was to be at Putin's summer home at the Black Sea resort of Sochi. The two are to cap an often contentious seven-year relationship that will come to end when Putin leaves office next month. They hope to produce a new "strategic framework" to guide relations to a less rocky future beyond their time in office.

Over dinner and again in talks Sunday, Bush and Putin are expected to make nice and emphasize the positive, such as the strategic framework and Russia's agreement this week to allow shipment of nonmilitary NATO supplies to Afghanistan through its territory.

But the U.S. plan to deploy a missile shield in Europe is a major source of friction between the two countries. Though the concept is vehemently opposed by Russia, it won NATO leaders' full support this week.

And the U.S. desire to see NATO open the admission process for Ukraine and Georgia also roils Russian officials. The ex-Soviet republics' aspirations to become part of the alliance were snubbed at this week's NATO summit, a victory for Putin.

PUTİN VICTORY MAY BE SHORT LIVED

But Bush and his aides have been quick to point out that alliance leaders vowed to eventually open the path to joining, possibly as early as December. Putin's victory, they say, may be short-lived.

Bush did not directly tweak Russia in his speech, and while advocating further NATO enlargement, he never mentioned Ukraine and Georgia.

Bush pointed out the "success of U.S.-supported democratization" in the volatile Balkans, where the effects of the disintegration of the former Yugoslavia still roil relations between Washington and Moscow.

Bush also discussed the importance of security and stability in the Balkans, noting that at their summit in Romania, the NATO leaders offered "intensified dialogue" to Bosnia and Montenegro, two other states once part of Yugoslavia.

'NATO OPEN TO ALL COUNTRIES IN THE REGION'

"The NATO alliance is open to all countries in the region," he said. "We hope that, soon, a free and prosperous Serbia will find its rightful place in the family of Europe and live at peace with its neighbors. With the changes under way in this region, Europe stands on the threshold of a new and hopeful history."

Croatia has troops in Afghanistan, but not Iraq.

Croatia's former nationalism once made Washington wary, and the U.S. did not recognize its independence until 1992. The country later drew Bush administration ire by opposing the U.S.-led war in Iraq and refusing to allow U.S. soldiers exemption from war crimes prosecution. But Croatia's emergence as a stable nation in the turbulent region, the pro-Western government it elected in 2000 and its contribution in Afghanistan more recently has earned it U.S. support.

"We stand together as one free people," Bush said.