President Bush faced fresh questions about U.S. plans to build an Europe-based missile defense system on Monday from Bulgarian leaders, who believe "their loyalty" in Iraq should be rewarded with the rocket shield. 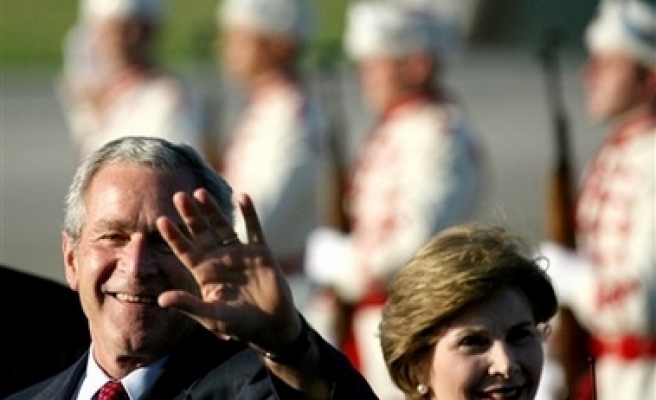 President Bush faced fresh questions about U.S. plans to build an Europe-based missile defense system on Monday from Bulgarian leaders, who believe "their loyalty" in
Iraq should be rewarded with the rocket shield.

The final portion of Bush's European trip was a two-day stay in the Baltics, eight hours in Albania on Sunday followed by a day of events in Bulgaria's capital, one of Europe's oldest.

On a sunny, cool morning, the president and Bulgarian President Georgi Parvanov walked down a long red carpet in Nevsky Square past a line of Bulgarian troops wearing white coats trimmed in red and navy breeches tucked into high black boots.

Cannons boomed as a band played the U.S. national anthem. After reviewing troops, goose-stepping to upbeat military music, Bush prayed before a wreath placed for him at an eternal flame that marks Bulgaria's monument to an unknown soldier.

He greeted a line of Bulgarian veterans of the wars in Iraq and Afghanistan, crossed the street to shake hands with hundreds of local residents excited to see him, then began his day of talks with Parvanov, Prime Minister Sergei Stanishev and a round-table on free-market economic principles in a democracy.

After moving through the Czech Republic, Germany, Poland and Italy on an eight-day trip, Bush was to be back in the White House by Monday evening.

Tiny, impoverished Albania gave Bush a "hero's welcome" on Sunday. Its leaders gushed over the president, the first to visit their country, and its people manhandled him in excitement.

Bulgaria, situated to the east of Albania on the Black Sea, also is a strong ally where Bush is more popular than in many other parts of the world. The two stops gave an upbeat ending to a trip that featured huge protests at a summit in Germany of industrialized nations and in Rome.

But Bulgaria's leaders have concerns about U.S. plans for a new rocket shield. For one thing, the defense system isn't intended to cover southeastern parts of Europe like Bulgaria. Foreign Minister Ivailo Kalfin said his government hopes to change this.

"Our wish is not to find ourselves in a zone of unequal security," Kalfin said.

Another worry comes from the tensions the proposed shield have created between the United States and Russia. Moscow fiercely opposes the plan, saying that placing it in the Czech Republic and Poland means the shield is aimed at Russia.

The United States claims, the shield is aimed at Iran.

The dispute has elicited tough and threatening rhetoric from the Kremlin. Last week, Russian President Vladimir Putin presented Bush with a substitute plan, in which an existing radar station in Azerbaijan would be used instead of a new one in the Czech Republic. Putin said he'll drop his objections if Bush agrees to change his plan; the president said only that they'll discuss it.

Bulgaria feels caught in the middle. It was the most loyal Soviet ally during the Cold War, and even now is almost entirely dependent on Russian energy supplies. Over the weekend, a few hundred pro-Communist demonstrators rallied against Bush's visit, holding "Stop Bush" posters and chanting slogans.

Still, Bulgaria looks to align its future with the West. Bulgaria shed communism in 1989, and it became a member of NATO in 2004 and the European Union in January. It has sent troops to Iraq and Afghanistan, and its parliament recently extended the Iraq mission until March 2008. Last year, Bulgaria signed an agreement with Washington allowing U.S. troops to use Bulgarian military facilities.

Bulgaria's leaders were appealing to Bush for U.S. help in freeing five Bulgarian nurses and a Palestinian doctor sentenced to death in Libya for allegedly infecting 400 children with the AIDS virus at a hospital in Benghazi.

The EU and the U.S. repeatedly have urged Libyan authorities to release the six, who have been in Libyan custody since 1999. Libyan court officials said they confessed, but some of the nurses have since claimed they confessed under beatings and torture. They all say they are innocent

Another issue Bulgarian leaders may raise is one Bush hears about often in his travels in Eastern European countries — why their participation in Iraq and Afghanistan has not helped them escape discrimination in the U.S. visa waiver program.

Citizens from 12 of the 27 EU nations cannot enter the United States without applying for a travel visa. U.S. officials say most of the newer EU members, particularly those that were within the Soviet bloc during the Cold War, still fail to meet criteria for joining the visa-waiver program. Last Mod: 11 Haziran 2007, 19:25
Add Comment