Bush gives $1 billion a year to Pakistan to fight 'terror' 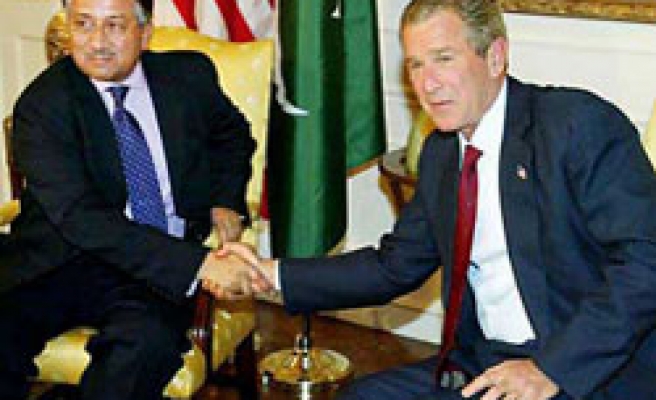 The United States is continuing to make large payments of roughly $1 billion a year to Pakistan for what it calls reimbursements to the country’s military for conducting "counterterrorism" efforts along the border with Afghanistan.

The monthly payments, called "coalition support funds", are not widely advertised. Buried in public budget numbers, the payments are intended to reimburse Pakistan’s military for the cost of the operations. So far, Pakistan has received more than $5.6 billion under the program over five years, more than half of the total aid the United States has sent to the country since the Sept. 11, 2001, attacks, not counting covert funds.

Some American military officials in the region have recommended that the money be tied to Pakistan’s performance in pursuing Al Qaeda and keeping the Taliban from gaining a haven from which to attack the government of Afghanistan. American officials have been surprised by the speed at which both organizations have gained strength in the past year.

But Bush administration officials say no such plan is being considered, despite new evidence that the Pakistani military is often looking the other way when Taliban fighters retreat across the border into Pakistan, ignoring calls from American spotters to intercept them.

The administration, according to some current and former officials, is fearful of cutting off the cash or linking it to performance for fear of further destabilizing Pakistan’s president, Gen. Pervez Musharraf, who is facing the biggest challenges to his rule since he took power in 1999.

The White House would not directly answer the question of why Pakistan is being paid the same very large amount after publicly declaring that it is significantly cutting back on its patrols in the most important border area. But Gordon Johndroe, a spokesman for Stephen J. Hadley, the national security adviser, emphasized Pakistan’s strategic importance in the region.

“Pakistan’s cooperation is very important in the global war on terror and for our operations in Afghanistan,” Mr. Johndroe said. “Our investments in that partnership have paid off over time, from increased information sharing to kills and captures of key operatives. There is more work to be done, the Pakistanis know that, and we are engaged with the Musharraf government to ramp up the fight.”

The Pentagon, in response to inquiries, said Friday that the payments to Pakistan since October 2001, when the war in Afghanistan began, had averaged $80 million a month. The Congressional Research Service estimated last year that they accounted for about a fifth of Pakistan’s total military expenditures.

“In funding the Pakistani military, we are making it easier for Musharraf to fulfill his objectives, and we are keeping the military off his back,” said Xenia Dormandy, a former director for South Asia for the National Security Council who is now a scholar at the Kennedy School of Government at Harvard.

“It is a very good question to raise,” he added. “If we are giving a billion dollars to the military each year, would that money not be better spent building schools, roads and health services in that region?”

A study of the roughly $10 billion sent to Pakistan by the United States since 2002, conducted by Craig Cohen and Derek Chollet of the Center for Strategic and International Studies, found that $5.6 billion in reimbursements was in addition to $1.8 billion for security assistance, which mostly finances large weapons systems.

But those weapons are more useful, the authors concluded, in countering India than in fighting Al Qaeda and the Taliban. The United States has also provided about $1.6 billion for “budget support,” which Pakistan can use broadly, including for reducing debt.

In contrast, only about $900 million has been dedicated to health, food aid, democracy promotion and education, in a country where illiteracy rates are about 50 percent, and American policy makers say the education gap has opened the way for religious schools.
Last Mod: 20 Mayıs 2007, 18:05
Add Comment