Bush heads to Europe for G8

U.S. President George W. Bush leaves for Europe on Monday with his popularity at home at a low point over the Iraq war and tensions abroad over global warming and missile defense. 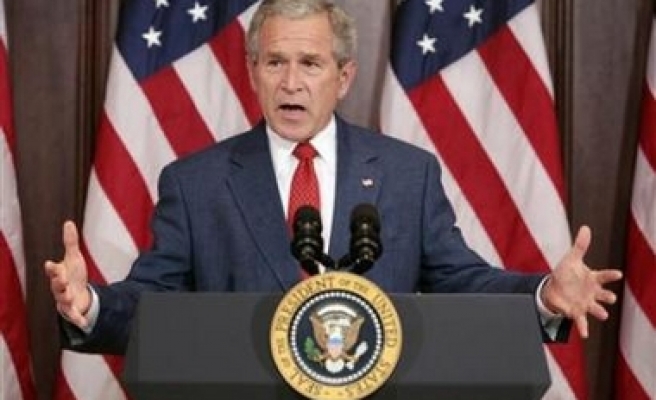 U.S. President George W. Bush leaves for Europe on Monday with his popularity at home at a low point over the Iraq war and tensions abroad over global warming and missile defense.

Built around the Group of Eight summit in Germany where his host Chancellor Angela Merkel had hoped to forge an agreement on climate change, Bush's trip includes stops in Eastern Europe.

With many Americans clamoring for an end to the Iraq war, the Republican president focused on a softer agenda ahead of the meeting.

Laying out his goals last week, Bush asked Congress to double funds for combating
AIDS, primarily in Africa, to $30 billion over five years and tried to dispel criticism by proposing a new global warming strategy. He also slapped sanctions on Sudan for what he called the genocide in Darfur.

"If you couple Bush's weak position at home with this unpopularity in much of Western Europe, Bush is probably not relishing this trip," said Charles Kupchan, director of Europe Studies at the Council on Foreign Relations.

"Particularly on the question of climate change, he will find himself isolated."

Europeans gave a cool reception to Bush's plan to bring together the world's biggest polluting countries by year-end to explore ways of limiting emissions and agree on a long-term goal by the end of 2008.

Some portrayed it as a defeat for Merkel, who wants the G8 to agree now on a need for cutting emissions of greenhouse gases about 50 percent by 2050.

"The general view in Europe is: let's be patient, November 2008 is coming," Kupchan said, referring to the next U.S. presidential election. "It's fair to say every European government is looking expectantly to the post-Bush era."

One of the most watched meetings on the sidelines of the summit will be with Russian President Vladimir Putin, whose escalating criticism of the United States has raised concerns about the deterioration of U.S.-Russian ties.

Putin vehemently opposes U.S. plans for a missile defense shield in the Czech Republic and Poland, seeing it as a threat to Russia. Bush has asked Russia to join in the defense system, saying it is intended as protection from potential threats from other states such as Iran.

In a preemptive move that could take some of the tension out of the session, Bush has invited Putin to his family's retreat in Maine next month for two days of talks.

In Prague, Bush will talk about the need to advance democracy at an international conference organized by human rights and pro-democracy activists, including former Czech President Vaclav Havel, who was a leader in the "Velvet Revolution" that ended communism in the former Czechoslovakia.

Bush will thank Poland for cooperating in the missile defense system.

His visit to Albania, the first by a sitting U.S. president, comes as the United States locks horns with Russia over the issue of statehood forKosovo, which is majority ethnic Albanian.