Bush: Kosovo will be independent

President George W. Bush said on Sunday the United Nations should grant independence quickly to Kosovo, and if Russia continued to block it the West would act. 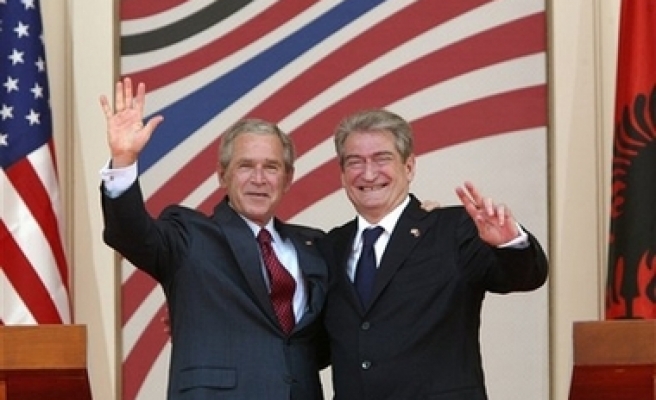 President George W. Bush said on Sunday the United Nations should grant independence quickly to Kosovo, and if Russia continued to block it the West would act.

"At some point in time, sooner rather than later, you've got to say enough is enough, Kosovo is independent," he told a news conference on the first visit by a U.S. president to Albania.

Bush said he was "worried about expectations not being met" in Kosovo, where 90 percent of the population are ethnic Albanians demanding independence from Serbia and where NATO leads a peacekeeping force of 17,000 troops.

He said Washington would continue to seek a solution through the United Nations but "if it is apparent that (an agreement) is not going to happen in a relatively quick period of time, in my judgment, we need to put forward the resolution. Hence, deadline," Bush said.

Kosovo has been run by the United Nations and NATO since 1999 when the West bombed Serbia for 11 weeks to halt its brutal crackdown on an ethnic Albanian insurgency, in which Serb forces killed some 10,000 civilians and drove out nearly a million.

Russia has the power to veto the resolution, and Putin informed visiting Serb premier
Vojislav Kostunica "with pleasure" at the weekend that he had thwarted Western plans at the G8 summit in Germany last week.

Bush said Secretary of State Condoleezza Rice would pursue the dispute through diplomatic means with Moscow, along with America's European allies, all of whom back the plan by U.N. envoy Martti Ahtisaari to make Kosovo independent under
European Union supervision.

But in the clearest terms he has used so far, Bush said: "Independence is the result, let's get the process moving."

Kosovo Prime Minister Agim Ceku hailed Bush's "clear and strong message to the people of Kosovo that independence will come very soon and their long-held wish will be fulfilled."

Bush also urged Serbia to reconsider its adamant opposition and think of its future as part of the West.

"We want to make sure that Serbia hears that the United States supports their aspirations for closer integration with the West. That means working with the United States in a bilateral fashion. It also means potential membership of NATO for example."

"Secretary Rice will be moving hard to see if we can't reach an agreement and if not, we're going to have to move," Bush said. "Independence is the goal. That's what the people of Kosovo need to know."

There could not be "endless dialogue on a subject that we have made up our mind about," he added.