Bush: Russia is not the enemy

Russia is not an enemy of the United States and has nothing to fear from a proposed missile defence system designed to thwart a possible nuclear attack from Iran, the US president says. 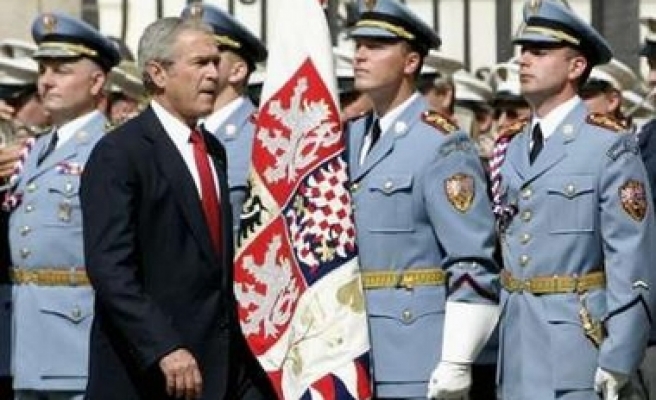 Russia is not an enemy of the United States and has nothing to fear from a proposed missile defence system designed to thwart a possible nuclear attack from Iran, the US president says.

"Russia is not the enemy," George Bush said on Tuesday after meeting Czech leaders in a visit en route to the G8 summit in Germany.

He said he would take a message to Vladimir Putin, the Russian president, that "we can work together on common threats".

The Kremlin is opposed to the missile shield, and Putin said on Monday that Russia could take "retaliatory steps" if Washington insisted on building it.

Polls show that more than 60 per cent of Czechs are against plans to station a radar system southwest of Prague, and surveys in Poland - where 10 interceptor missiles would be based - show strong opposition there as well.

Both countries are still negotiating with the US over whether to host the shield.

Bush sought to play down Russia's response, which has overshadowed his European trip.

"The Cold War is over. It ended," Bush said at the medieval Prague castle, where he met Vaclav Klaus, the Czech president, and Mirek Topolanek, the prime minister.

"The people of the Czech Republic don't have to choose between being a friend of Russia or a friend of the United States. You can be both."

US experts contend the shield poses no threat to Russia because the missiles involved would be purely defensive and incapable of being fitted with warheads.

Bush said the system would be co-ordinated with Nato. He said he would urge Putin to participate.

"Please send your generals over to see how such a system would work. Send your scientists," Bush said.

Klaus said he had frank and open discussions with Bush on the missile shield, "and we understand each other".

"We are aware that the US bears high responsibility for the situation in the world, and I would like to stress that the United States and President Bush have our support in that," said Klaus, whose country has deployed troops to the US-led campaigns in Iraq and Afghanistan.

Bush also said he was working with the US congress to ease visa restrictions for Czechs.