Bush and Putin will meet Wednesday at the opening of the summit of industrialized nations. Bush said "Russia is not going to attack Europe." 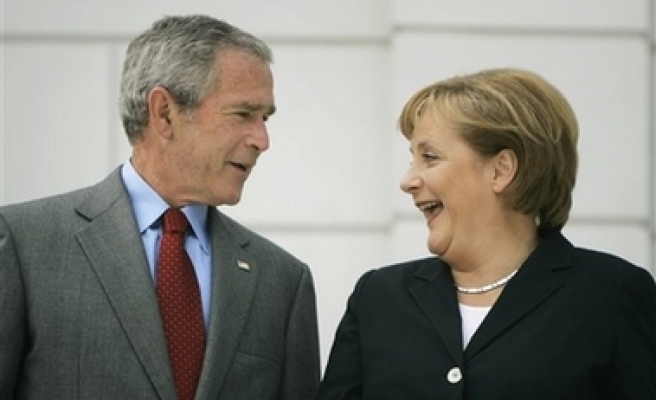 Bush, in an interview with the reporters, said that no U.S. military response was required after Putin warned that Russia would take steps in response to a U.S. missile shield that would be deployed in Poland and the Czech Republic.

"Russia is not an enemy," Bush said, sitting in a sun-drenched garden. "There needs to be no military response because we're not at war with Russia. Russia is not a threat."

Bush and Putin will meet Wednesday at the opening of the summit of industrialized nations. Asked if he anticipated a tense encounter, Bush replied "Could be. I don't think so ... I'll work to see that it's not a tense meeting."

On climate, Bush said he would not give ground on global warming proposals that would require mandatory caps on greenhouse gas emissions. Instead, he backed his own proposal that the United States and other nations that spew the most greenhouse gases meet and — by the end of next year — set a long-term strategy for reducing emissions.

Bush's plan addresses "life after" 2012, the expiration date for the Kyoto Protocol, which the United States didn't sign.

Bush wants to bring India, China and other fast-growing countries to the negotiation table. He envisions that each country will set goals on how they want to improve energy security, reduce air pollution and cut greenhouse gases in the next 10 to 20 years.

He said that the summit, running Wednesday through Friday, would produce a consensus for a post-Kyoto framework after the landmark treaty expires in 2012.

Putin rattled nerves in Europe with his weekend declaration that he would retarget missiles on Europe in response to the missile defense shield. "I don't think Vladimir Putin intends to attack Europe," Bush said.
Last Mod: 06 Haziran 2007, 15:47
Add Comment