Sejdiu, through a translator, expressed appreciation for U.S. support and said his country wanted good relations with Serbia. 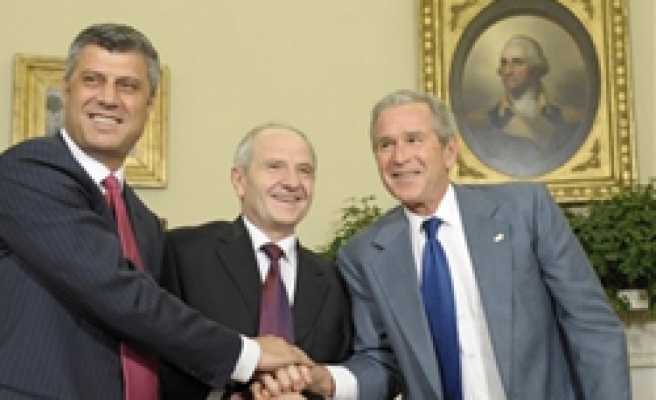 President George W. Bush on Monday told leaders of Kosovo he would urge more countries to recognize Kosovo and he opposed partition of the newly-independent state.

"I'm a strong supporter of Kosovo's independence. I'm against any partition of Kosovo," Bush said after meeting with President Fatmir Sejdiu and Prime Minister Hashim Thaci.

Kosovo, which broke away from Serbia in February, has been recognized by more than 40 governments, including Turkey, the United States, the majority of European Union and NATO members, and some Asian and Middle Eastern countries.

Serbia and its big-power ally Russia vehemently opposed the declaration of independence.

"I pledge that the United States would continue to work with those nations that have not recognized an independent Kosovo to convince them to do so as quickly as possible," Bush said.

Sejdiu, through a translator, expressed appreciation for U.S. support and said his country wanted good relations with Serbia.

The new country is trying to join the World Bank and International Monetary Fund and has a long-term goal of entering NATO and the European Union.