According to historical textbooks, Empress Faustina Maior, wife of 16th century Roman Emperor Antoninus Pius, was a beautiful woman, renowned for her wisdom. 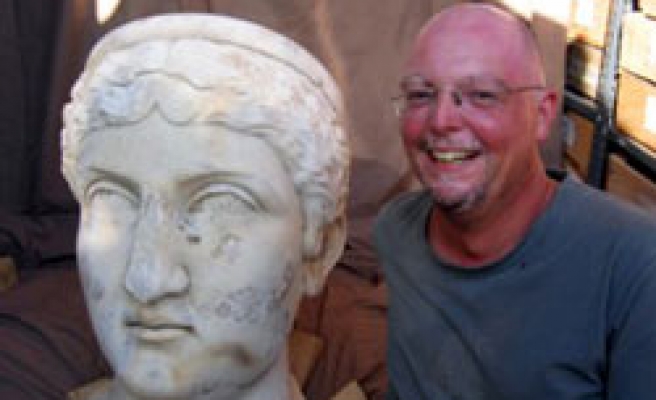 A female bust belonged to has been unearthed during the archaeological excavations in the ancient city of Sagalassos in southwestern Turkey.

Jeroen Poblome of the Belgian Katholieke Universiteit Leuven told the A.A on Wednesday that they found a bust of the wife of Antoninus Pius who reigned the Roman Empire from 138 to 161,

The 300-kg sculpture was taken to the excavation center in the neighboring town of Aglasun.

After restoration works are completed, the sculpture will be displayed in the museum in the southern province of Burdur.

According to historical textbooks, Faustina was a beautiful woman, renowned for her wisdom. She spent her whole life caring for the poor and assisting the most disadvantaged Romans. Faustina bore Antoninus four children, two sons and two daughters.

Sagalassos is an archaeological site in southwestern Turkey. In Roman Imperial times, the town was known as the 'first city of Pisidia'. The urban site was laid out on various terraces at an altitude between 1400 and 1600 m. Inhabitants were forced to abandon their city after a devastating earthquake around the middle of the seventh century.

Large-scale excavations started in 1990 under the direction of Prof. Dr. Marc Waelkens of the Belgian Katholieke Universiteit Leuven. A large number of buildings, monuments and other archaeological remains have been exposed, documenting the monumental aspect of the Hellenistic, Roman and early Byzantine history of this town.