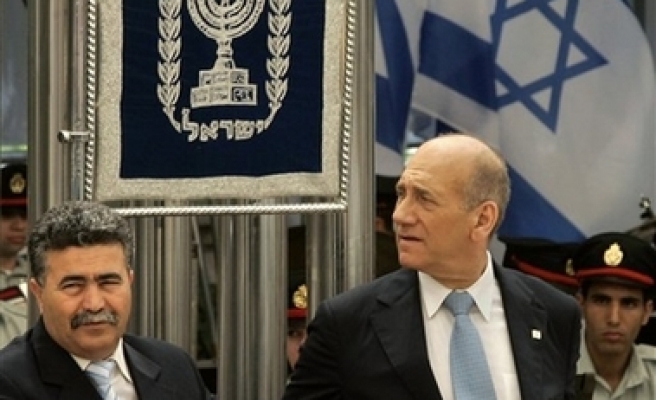 Members of Prime Minister Ehud Olmert's ruling coalition joined opposition lawmakers Sunday in calling for the Israeli leader and his defense minister to resign after parts of a government report criticizing their handling of last year's war in Lebanon were leaked to local media.

Officials close to the investigation confirmed TV reports that the panel concluded Olmert and Defense Minister Amir Peretz made hasty and ill-judged decisions at the outset of the war.

The report found these errors were compounded by their lack of experience and unfamiliarity with defense issues, the officials said on condition of anonymity pending the report's release.

Olmert appointed the commission last year to stave off calls for a full-scale judicial inquiry into the government's performance during the war.

Although the five-member commission, headed by a retired judge, has no authority to order resignations, a harsh report could be the final blow to Olmert's grasp on power. Heavy public criticism of the war, along with a string of corruption investigations, have sent his approval rating into free fall.

The interim report will analyze the first days of the fighting.

According to the people familiar with the investigation, the panel concluded that Olmert failed to sufficiently question the army's battle plans, publicly stated his war aims without ensuring they were attainable and failed to demand a clear exit strategy.

But after sections of the report reached the Israeli media, a growing number of critics, including members of the ruling coalition, called on Olmert to step down.

Former Cabinet minister Ofir Pines, a member of Peretz's Labor Party, said both men should follow the example of wartime military chief of staff, Lt. Gen. Dan Halutz, who quit in the face of criticism of his performance.

"I expect the prime minister and the defense minister to stand up and take responsibility and resign," he told Army Radio.

Another Labor lawmaker, Danny Yatom, said the entire Cabinet should resign, since they unanimously approved the decision to go to war.

"The whole Cabinet is party to these matter, he told Israel Radio. "They are all partners ... by virtue of their vote, and by the fact that they didn't stand up and say a word even if they had something to say."

Gideon Saar, of the opposition Likud, agreed: "The government is the body in charge of the military campaign and the government failed," he told Israel Radio.

Even members of his Kadima Party gave lukewarm support for their leader.

In addition to its criticism of Olmert and Peretz, the interim report will say "Halutz did not provide political leaders with a sufficient range of military options, played down the Hezbollah rocket threat and silenced dissenting opinions within the army command", Israeli media reported.