Cambodians went to the polls Sunday in an election dominated by a tense border dispute with neighboring Thailand that has fueled national sentiment, strengthening longtime PM Sen. 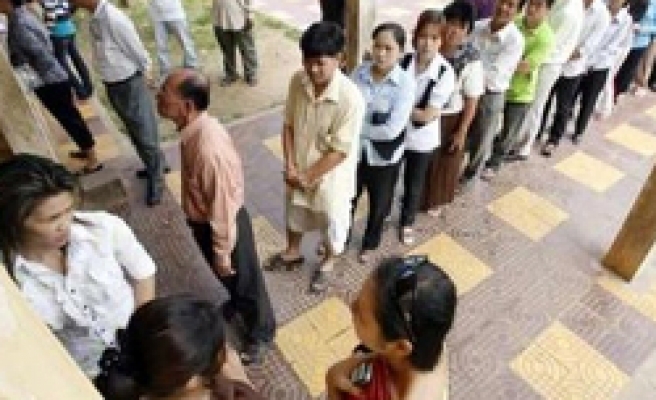 Cambodians voted on Sunday in an election likely to bestow another five-year term on long-time Prime Minister Hun Sen, whose standing has been boosted by a nationalist spat with Thailand over a 900-year-old temple.

However, the dispatching of troops to the border by Hun Sen, a one-eyed, 57-year-old ex-Khmer Rouge guerrilla and prime minister of the past 23 years, has made his already likely to victory that much more certain.

"The result is not in doubt," said Kek Galabru, head of Phnom Penh-based human rights group LICADHO, adding that the formerly communist but now firmly free-market CPP would probably win an outright majority in the 123-seat parliament.

As well as Hun Sen's argument that he has brought peace and stability after decades of Cold War upheaval and the ravages of Pol Pot's Khmer Rouge, the CPP has presided over an economy that has enjoyed five years of near double-digit growth.

Another sign of the improving lot of the country's 14 million people is a fall in the level of political violence, although human rights groups say four CPP and two SRP activists, including a journalist, were murdered in the month before polling.

Early voting passed off without major incident, but the SRP claimed as many as 10,000 people in Phnom Penh, where its support is strongest, had found their names had been left off voter lists.

The CPP is so confident of victory it has scheduled talks over Preah Vihear with Thailand's foreign minister in the tourist town of Siem Reap, home to Cambodia's famed Angkor Wat temple complex, on Monday.

The meeting is not expected to make major headway in resolving the dispute, which is mainly over 1.8 square miles (4.6 square km) of scrubland near the temple.

The ruins themselves are claimed by both countries but were awarded to Cambodia in 1962 by the International Court of Justice, a ruling that has rankled in Thailand ever since.

Analysts say Thai domestic politics are mainly to blame for the row, which flared up after Cambodia's successful bid to have the ruins listed as a World Heritage site.

Bangkok's initial support for the heritage listing was seized on by anti-government groups in their long-running attempt to unseat the government of Prime Minister Samak Sundaravej. His foreign minister was forced to resign over the issue.

There have been no major incidents so far, but both sides have sent troops and artillery to dig in near the temple and nearby Thai border villages are braced for conflict.