The student who killed 32 people in the United States' worst shooting rampage paused between shootings to mail video clips, photographs of himself brandishing weapons and profanity-laced writings to news network NBC, police say. 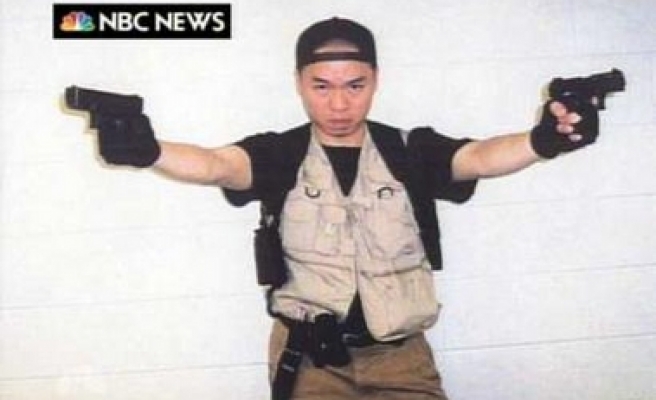 Cho Seung-hui, the student, said: "You forced me into a corner and gave me only one option."

NBC said the material included videos and a rambling manifesto-type statement which appeared to have been sent during the two-hour interval between the first and second shooting incidents at Virginia Tech university on Monday.

Cho said in a video that "this didn't have to happen".

Now you have blood on your hands that you will never wash off," the 23-year-old said, without making clear whom he was speaking to.

Steven Flaherty, Virginia state police superintendent, said that NBC, which received the package on Wednesday morning, immediately handed the material over to the FBI.

The post office time stamp on the package Cho sent indicates that after he killed two people in a student dormitory, he spent time putting together the package and then went to a nearby post office to mail it about two hours later.

He then proceeded to a classroom building on the campus where he killed 30 people before turning the gun on himself.

The letter, photographs and videos come amid an unfolding picture of a troubled student who had been accused of harassing female students and had been taken to a psychiatric hospital in 2005 on fears he was suicidal.

A Virginia court order issued at the time declared him "mentally ill" and said he presented "an imminent danger to self or others".
Wendell Flinchum, the university police chief, said his officers confronted Cho in late 2005 after two women complained separately that he had harassed them in person, through phone calls and with instant messages.

After the second incident in December 2005, Cho's roommate warned police he might be suicidal, prompting them to get a "temporary detention order" and send him to a nearby mental health facility for evaluation, Flinchum said.

The women declined to file charges against Cho. Neither was among his victims on Monday, police said.

One of his former teachers, poet Nikki Giovanni, said she had insisted Cho be removed from her class in 2005 because he intimidated other students by photographing them and writing obscene, violent poetry.

Despite encounters with the law and his past psychiatric treatment, Cho was able to legally purchase the two handguns he used in the attack.

The shooting has rekindled debate over US gun laws.

Tim Kaine, Virginia's governor, said a panel would review the response to the shootings, an inquiry requested by the university which has defended itself against criticism it waited too long after the first shooting in the dormitory to warn students of danger.

With the Virginia Tech campus still on edge, students got another scare on Wednesday when police swarmed into a building housing the university president's office.

But the report of suspicious activity turned out to be a false alarm.

Gie Kim, head of the Korean American Coalition's Washington chapter, said Cho's parents, who have made no public comment on the shooting, were "still in the grieving process".