The Cannes Film Festival turns 60 this year, and the milestone means a long line of stars jostling with some lesser-known names of arthouse cinema for the attention of the media and the fans. 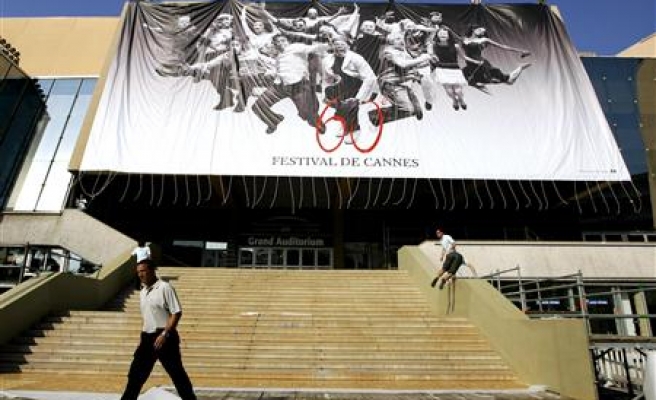 The Cannes Film Festival turns 60 this year, and the milestone means a long line of stars jostling with some lesser-known names of arthouse cinema for the attention of the media and the fans.

The glamorous Wednesday evening gala screening is the start of 11 days of networking, air kissing, deal making and backstabbing in the Riviera resort, host to the grande dame of the world's film festivals.

Turkey will show a strong presence at the Riviera this year with an entrant in the feature film competition and a jury member as well as taking part in the festival's concurrent side events such as the directors' fortnight, the atelier and the film market.

The main competition features more than 20 films, including Turkish-born German filmmaker Fatih Akın's "Auf Der Anderen Seite" (on the other side) as well as five US productions and heavyweight directors such as Quentin Tarantino, the Coen brothers, Gus Van Sant, Sarajevo-born Emir Kusturica and Russia's Alexander Sokurov. Critics are calling the selection one of the strongest in recent memory, although competitions have a habit of promising more than they deliver.

"I think this is probably the Cannes selection that has excited me most in a decade," Mark Cousins, a leading film critic and Cannes veteran, told Reuters. "It is because of the likes of Van Sant, Sokurov, Kusturica and Wong -- these are major directors who have consistently delivered quality films over a number of years." He expects Van Sant and the Coen brothers to stand out among the US entrants, while Tarantino's "Death Proof," already in US cinemas as part of a double bill, was a box office flop.

In the race for the top prize, the Palme d'Or, they are up against more obscure filmmakers such as France's Catherine Breillat and Christophe Honore, Kim Ki-duk and Lee Chang-dong of South Korea, Romania's Cristian Mungiu and Ulrich Seidl of Austria.

As always, the competition risks turning into a sideshow, with Hollywood sequel "Ocean's 13," starring George Clooney and Brad Pitt, premiering in Cannes, and Angelina Jolie promoting "A Mighty Heart," based on the story of slain reporter Daniel Pearl. They are just two among hundreds of pictures being promoted in Cannes, a key date in film executives' calendars.

There are no major blockbusters at the festival this year, unlike 2005's Star Wars sequel and 2006's "The Da Vinci Code," which went on to gross $758 million worldwide despite a critical mauling in Cannes and elsewhere.

There are also few overtly political films, although Michael Moore's documentary "SiCKO," about the US healthcare system, is likely to cause a stir just as anti-Bush polemic "Fahrenheit 9/11" did when it won the 2004 Palme d'Or.

Heartthrob Leonardo DiCaprio is in town with "The 11th Hour," his environmental documentary that is the latest sign of Hollywood's growing preoccupation with global warming.

And although no British film appears in the main competition after Ken Loach won the Palme d'Or in 2006 with "The Wind That Shakes the Barley," some of Britain's biggest musical acts will be seen this year. Martin Scorsese is expected to present clips from his documentary about the Rolling Stones, "Control" looks at the life and premature death of Joy Division's Ian Curtis and "The Future is Unwritten" examines the Clash's Joe Strummer. U2 frontman Bono is expected in Cannes for "U2 3D," another "rockumentary."

Meanwhile the Turkish-Greek co-production "Yumurta" (Egg), the first installment in Turkish filmmaker Semih Kaplanoğlu's "Trilogy of Yusuf," will be screened at the festival's Directors' Fortnight section. The second film in the trilogy, "Süt" (Milk), has been selected for the Atelier section of the festival. The festival runs from May 16 to 27.

The 60th edition of the Cannes Film Festival opens on Wednesday. Here are some facts about the world's largest film festival:

* Originally conceived in 1939 as an alternative to the then-Fascist-influenced Venice Film Festival, Cannes has been held annually since 1946 apart from 1948 and 1950, when it was canceled because of lack of funds.

* In 1960, the first Cannes Market opened its doors to 10 participants and one screen. It quickly became a major meeting point for buyers and sellers from all over the world.

* Jane Campion became the first female director to win the Palme d'Or in 1993 for "The Piano."

* In 1997 a "Palme des Palmes" -- a super-version of the Palme d'Or best film prize -- was awarded to Ingmar Bergman for the 50th festival. The Swedish director did not appear.

* British films triumphed at the festival in 2006 with veteran Ken Loach's war-themed "The Wind That Shakes the Barley" winning the Palme d'Or and newcomer Andrea Arnold picking up the Jury Prize for "Red Road."

* In 2007 Cannes is traveling back in time with a series of classic screenings. Polish director Andrzej Wajda will preside over Cannes Classics 2007 and present a restored copy of "Kanal," winner of the Special Jury Prize in Cannes 50 years ago. A "John Wayne Centenary" will celebrate the actor with screenings of "Hondo" and "Rio Bravo."