A series of car bombings killed at least 169 people in Baghdad on Wednesday, the deadliest violence since the start of a US-led security crackdown in the capital in February. 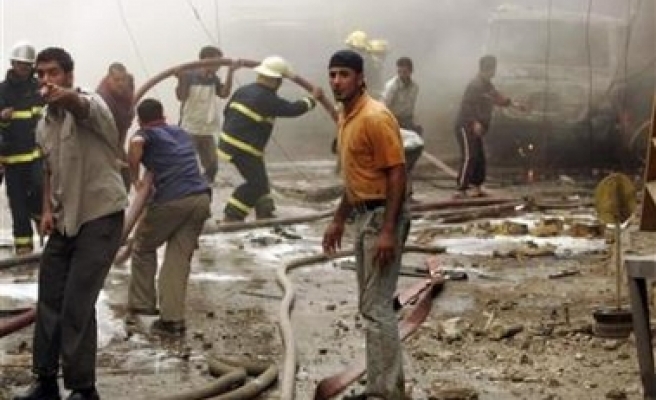 The attacks came only hours after Nuri al-Maliki, the country’s prime minister, said his forces would take over security in Iraq from US-led forces by the end of the year.

The deadliest of the explosions to rock the city on Wednesday left at least 119 people dead near a market in the Sadriya area of the city.

Scores more were injured and many of the victims were commuters, including women and children.

The huge blast occurred when a parked car exploded near a major intersection and in a busy market area, scattering bodies among a row of burnt-out buses.

Elsehwere in the city an earlier explosion killed least 30 people in the predominately Shia area of Sadr City.

Forty-five people were also wounded when a suicide bomber struck among civilian cars queuing up at a checkpoint in the large suburb that is home to around 2.5 million people.

Police said five Iraqi security officials were among the dead.

Across the city another car bomb killed 10 people and wounded 15 in the district of Karrada. The blast damaged the Abdul-Majid hospital and other nearby buildings.

Elsehwere a bomb inside a minibus killed two people and wounded five near al-Shurja in central Baghdad, police said.

Another bomb attack on a minibus in the northwestern Risafi area killed four people and wounded six others.

The violence is a serious setback for US and Iraqi authorities trying to secure Baghdad and the attacks are the deadliest since a crackdown was implemented in the Iraqi capital on February 14.

US officials have said there has been a slight decrease in sectarian killings in Baghdad since the plan was launched but this week alone saw a suicide bombing inside the parliament building and a powerful attack that caused a bridge across the Tigris river to collapse.

"We've seen both inspiring progress and too much evidence that we still face many grave challenges," William Caldwell, a spokesman for the US military, told reporters on Wednesday in Baghdad.

Frank Pascual, from US central command, told Al Jazeera that the security plan had not yet been fully implemented and will not be so until the end of May.

However Farid Sabri, from the Iraqi Islamic party, a Sunni group, said that he thought Wednesday’s attacks demonstrated the failure of the security plan.

"The rebuilding of the microeconomics, the restoring of services for the Iraqi people, all this has to really accommodate and come with the security measures."

The violence across the country continued as the prime minister declared that his forces were aiming to take over security matters in Iraq from US-led forces by the end of the year.

In a speech delivered on his behalf at a ceremony marking the handover of southern Maysan province from British to Iraqi control, al-Maliki said three provinces in the autonomous Kurdistan region would be next, followed by Kerbala and Wasit provinces.

"Then it will be province by province until we achieve (this transfer) before the end of the year," al-Maliki said in the speech delivered by Mowaffaq al-Rubaie, the national security adviser.

Al-Rubaie said this could happen even sooner.

"We are working very hard to get all provinces to have control and transfer security responsibilities ... well before Christmas," he said after the ceremony.

But Hoda Abdel-Hamid, al Jazeera's Iraq correspondent, said that while the Iraqi security forces now number around 350,000, they are still not well-equipped.

She says many in the forces are looking at the US army and saying "this is the mightiest army in the world and if they cannot do this job, how do you expect us to do this job?"

Elsewhere in Iraq on Wednesday, US troops killed five suspected fighters and captured 30 others in a raid in the western Anbar province, a day after police uncovered 17 decomposing corpses beneath two school yards in the provincial capital.

In other violence, two brothers were killed and a policeman was hurt in a gun battle in Baqouba, 60km northeast of Baghdad, police said.