They survived three decades of war, but they risk being toppled by road traffic: the last five mediaeval minarets of Herat are being slowly shaken to dust. 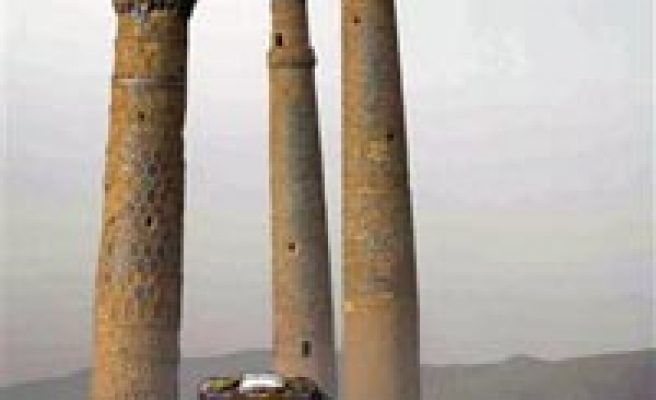 The minarets are all that remain of what was once a wonder of art and architecture, a brilliantly decorated complex of Islamic learning and devotion on the Silk Road in western Afghanistan.

Little more than a century ago, more than a dozen of these minarets peered over the ancient city of Herat, part of a madrasah-mosque complex built in the 15th century by the daughter-in-law of the all-conquering mogul emperor Timur.

War and neglect have since toppled most of the camel-colored mud-brick towers, which were once sheathed in sparkling blue, green, white, and black mosaic tiles, reaching heights of more than 100 feet (30 meters) and shining out across the desert.

But after US-led forces evicted the Taliban from national power in 2001, a relative amount of both peace and prosperity has returned to Herat and there are hopes that these minarets can be preserved.

But there is one big problem: traffic.

Trucks and cars rumble along a busy road that runs right through the middle of the group of remaining minarets, shaking the ground and sending tremors through their foundations.

If it is not closed, there are fears that any of the minarets could crumble or fall in the coming years and decades. One of them is already on a dangerous tilt.

"In the past five years, we tried to block the road going close to the minarets. Fortunately, we succeeded and blocked the road — for a little bit," said Ayamuddin Ajmal, who runs the Culture Ministry's historical monuments office in Herat.

But residents objected and the provincial government, unable or unwilling to invest in a road diversion, backed down, he said.

"The government has also a commitment regarding preserving the minarets, but still we see that the government has not blocked the road," said Ajmal, who keeps a small office in a niche of another of Herat's treasures, the Friday Mosque.

The Afghan government has submitted the old city of Herat, including the minarets, as a candidate for listing as a UNESCO World Heritage Site. This would put Herat in the same class as China's Great Wall, the pyramids of Egypt, and the Acropolis of Athens.

In theory, both central and provincial governments support the closure of the road to preserve the minarets, but in reality, there is insufficient political will to do so.

The road has not only remained open, it has actually been widened in the past few years, said Brendan Cassar, a culture consultant for UNESCO, the UN body that works with national governments to preserve sites of world cultural significance.

"There has to be some kind of will to preserve the heritage, some kind of expression of interest that this is important to Afghanistan's cultural heritage and therefore important to world heritage," Cassar said at UNESCO's tiny office in Kabul.

The old city of Herat is already on the tentative list for inclusion on UNESCO's register of World Heritage Sites. Eventual inscription on the register could help ensure more funding to preserve Herat's antiquities and put the city on the tourist map.

But both the Culture Ministry's Ajmal and UNESCO's staff in Kabul say local authorities are undermining the old city's character, not only by refusing to close the road through the minarets complex but also by allowing unchecked development.

In Afghan terms, Herat is a boom town, thanks largely to blossoming trade across the nearby border with Iran, less than a two-hour drive away on a sealed highway.

New shimmering buildings of glass and concrete are sprouting up, overlooking the old city and challenging the minarets' command of the skyline for the first time in six centuries.

"Many high buildings have been built in Herat city which is against UNESCO rules," Ajmal said. "The height of the buildings inside (old) Herat should not be more than seven meters."

Across the road from the tilted minaret, there is a modern building going up that is already well over seven meters tall.

The minaret itself is held up by two spans of cable, bracing it against seemingly imminent collapse onto the road. It is only a temporary measure, until the road is closed and the entire site can be secured for preservation and archaeological works.

There is a gaping hole about half way up the tower, exposing the stairwell inside. The whole is the legacy of a rocket or artillery attack in the 1980s, when Soviet occupiers were fighting mujahideen.

The Culture Ministry and UNESCO are continuing to work on a submission for World Heritage status, and UNESCO says it is channeling more than US$360,000 of Norwegian money into preservation work into the old city this year alone.

But if Afghan authorities at local or national level cannot even close a road or enforce a building code, UNESCO questions their commitment to protecting their own cultural heritage, despite the economic benefits of creating a tourism drawing card.

"This is a historical site that can contribute to people's livelihoods for decades to come," Cassar said. "It's jobs."