Carter calls Israeli blockade of Gaza 'a crime and atrocity'

Former U.S. President Carter Palestinians in Gaza were being "starved to death," receiving fewer calories a day than people in the poorest parts of Africa. 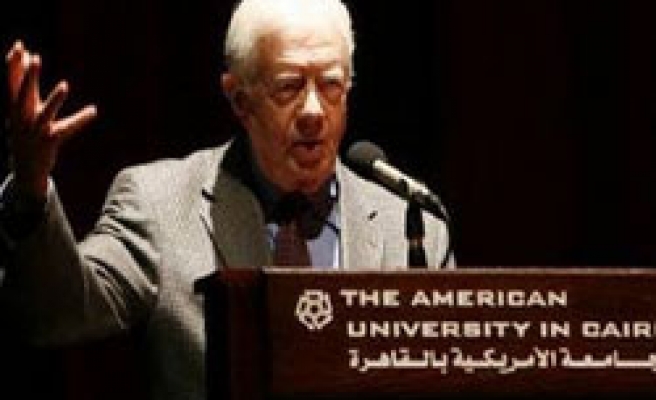 Former U.S. President Jimmy Carter called the blockade of Gaza a crime and an atrocity on Thursday and said U.S. attempts to undermine the Islamist movement Hamas had been counterproductive.

Speaking at the American University in Cairo after talks with Hamas leaders from Gaza, Carter said Palestinians in Gaza were being "starved to death," receiving fewer calories a day than people in the poorest parts of Africa.

"It's an atrocity what is being perpetrated as punishment on the people in Gaza. it's a crime... I think it is an abomination that this continues to go on," Carter said.

Israel has been blockading Gaza mort of the time since Hamas took control of the impoverished coastal strip in June last year.

Israel has not accepted Hamas proposals for a truce.

Carter said Israel and its ally the United States were trying to make the quality of life in Gaza markedly worse than in the West Bank, where the rival Fatah group is in control.

The United States has been trying to achieve the opposite outcome.

"Example to be emulated"

Carter, who helped make peace between Egypt and Israel while president in the 1970s, said the Hamas leaders he has met so far told him they would accept a peace agreement with Israel negotiated by Mahmoud Abbas -- the Fatah leader and Palestinian president -- if the Palestinians approved it in a referendum.

Carter said Hamas, which won Palestinian parliamentary elections in 2006, had to be involved in any arrangements that could lead to peace.

"One of the reasons I wanted to come and meet with the Syrians and Hamas was to set an example that might be emulated by others... I know that there are some officials in the Israeli government that are quite willing to meet with Hamas and maybe that will happen in the near future," he added.

Carter's talks in Cairo were with former Palestinian Foreign Minister Mahmoud al-Zahar and former Interior Minister Saeed Seyam, who did not speak to reporters.

Zahar and Seyam came to Cairo on Wednesday after the Israeli authorities refused to let Carter into Gaza from the Israeli side. Carter has already met a West Bank leader from Hamas and is expected to meet leader Khaled Meshaal in Damascus.

Earlier on Thursday, Carter met Egyptian President Hosni Mubarak. No details were available from either side.