Former U.S. President Jimmy Carter arrived in Damascus on Friday for talks with exiled leaders of Hamas, the Islamist group which he said should be included in international efforts for Israeli-Palestinian peace. 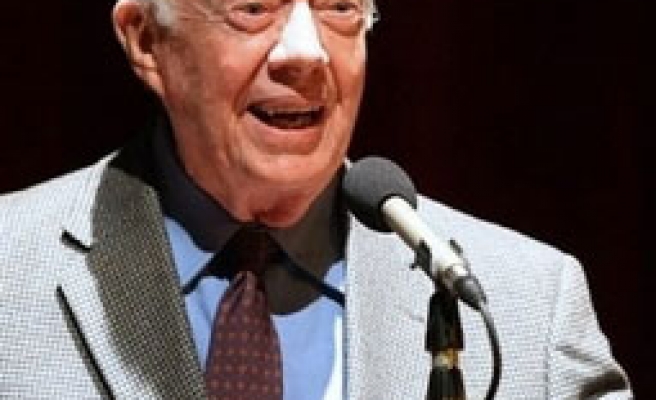 Former U.S. President Jimmy Carter arrived in Damascus on Friday for talks with exiled leaders of Hamas, the Islamist group which he said should be included in international efforts for Israeli-Palestinian peace.

Carter, who is on a Middle East tour to hear views on solving the historic conflict, will meet Hamas leader Khaled Meshaal and senior Hamas members in one of the highest profile encounters between the group and a Western figure.

The former statesman, who brokered the 1979 peace treaty between Israel and Egypt when he was president, met two senior Hamas officials in Cairo on Thursday after Israel refused him permission to enter the Gaza Strip, where they live.

Carter said the Hamas leaders he had met in Cairo told him they would accept a peace agreement with Israel negotiated by Palestinian President Mahmoud Abbas, leader of the rival Fatah faction, if the Palestinians approved it in a referendum.

But one of them, Mahmoud al-Zahar, wrote this week that a peace process could not start until Israel withdrew from all the land it occupied in the 1967 war, ended its military occupation in the West Bank and Gaza, dismantled all settlements, repudiated its annexation of Arab East Jerusalem, released all prisoners and ended its air, sea and land blockade of Palestinian land.

"Given what we have lost, it is the only basis by which we can start to be whole again," Zahar wrote in an article published by the Washington Post this week.

"Carter is a respected figure and his visit may encourage some in the West to open channels with Hamas," Badwan said.

"The meeting shows that Fatah has no longer a monopoly on the Palestinian national decision. We are even hearing Israeli voices calling for dialogue with Hamas," he added.

In a proposal passed to Carter this week, an Israeli cabinet minister offered to meet the leadership of Hamas to ask for the release of a soldier held in Gaza.

Hamas says it is a legitimate resistance group fighting Israeli occupation. Carter said Hamas, which won Palestinian parliamentary elections in 2006, must be involved in any arrangements that could lead to peace.

Carter has expressed sympathy for the Palestinians during his tour, calling the blockade of Gaza a crime and an atrocity.

He was due to meet Syrian President Bashar al-Assad before seeing Meshaal.

The Baathist government in Damascus hosts Meshaal and other exiled Hamas leaders, despite its longstanding suppression of Syrian Islamists -- an estimated 3,000 of whom are in jail.