Carter's meeting with Assad comes ahead of talks with exiled leaders of Hamas. 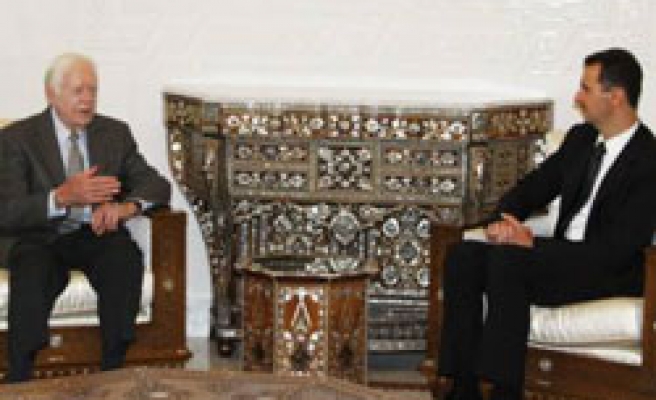 Jimmy Carter met Syrian President Bashar al-Assad on Friday, beginning a round of talks at which the former U.S. president is expected to raise the case of a detained Israeli soldier.

Carter's meeting with Assad comes ahead of talks with exiled leaders of Hamas, the Islamist group which the U.S. statesman argues should be included in efforts for Israeli-Palestinian peace.

Carter, who is on a Middle East tour to hear views on solving the conflict, will later meet Hamas leader Khaled Meshaal and senior Hamas members in one of the highest profile encounters between the group and a Western figure.

Carter and Assad posed for photographs ahead of their meeting at a presidential palace. One source familiar with the talks said Carter would raise in his meetings the issue of an Israeli soldier who is held by Hamas.

Previous efforts to broker a prisoner exchange deal between Hamas and Israel involving the soldier, who was captured by Palestinian fighters in a 2006 raid on Israeli territory, have floundered.

"Carter is very upbeat. The publicity put out by his detractors made him more determined to pursue a different way with Hamas. He is optimistic that the meeting will advance efforts to end the soldier's saga," the source said.

In a proposal passed to Carter this week, an Israeli cabinet minister offered to meet the leadership of Hamas to ask for the release of a soldier held in Gaza -- a move which would contravene official Israeli government policy.

Carter, who brokered the 1979 peace treaty between Israel and Egypt when he was president, met two senior Hamas officials in Cairo on Thursday after Israel refused him permission to enter the Gaza Strip, where they live.

Carter said the Hamas leaders he had met in Cairo told him they would accept a peace agreement with Israel negotiated by Palestinian President Mahmoud Abbas, leader of the rival Fatah faction, if the Palestinians approved it in a referendum.

But one of them, Mahmoud al-Zahar, wrote this week that a peace process could not start until Israel withdrew from all the land it occupied in the 1967 war, ended its military presence in the West Bank and Gaza, dismantled all settlements, repudiated its annexation of Arab East Jerusalem, released all prisoners and ended its air, sea and land "blockade" of Palestinian land.

"Given what we have lost, it is the only basis by which we can start to be whole again," Zahar wrote in an article published by the Washington Post this week.

Palestinian political commentator Ali Badwan said Carter's meetings with Hamas could help erode a U.S.-led drive to isolate the group, which has refused to abandon armed struggle and recognise past Israeli-Palestinian peace agreements.

"Carter is a respected figure and his visit may encourage some in the West to open channels with Hamas," Badwan said.

"The meeting shows that Fatah has no longer a monopoly on the Palestinian national decision. We are even hearing Israeli voices calling for dialogue with Hamas," he added.

Israeli Prime Minister Ehud Olmert did not meet Carter during his visit to Israel and Washington criticised him for his contacts with Hamas, which both regard as a terrorist group.

Hamas says it is a legitimate resistance group fighting Israeli occupation. Carter said Hamas, which won Palestinian parliamentary elections in 2006, must be involved in any arrangements that could lead to peace.

Carter has expressed sympathy for the Palestinians during his tour, calling the blockade of Gaza a crime and an atrocity. He is accompanied on his tour by his wife and son as well as former U.S. lawmaker Stephen Solarz, who supported Israel strongly during his 18 years in Congress.

The Baathist government in Damascus hosts Meshaal and other exiled Hamas leaders, despite its longstanding suppression of Syrian Islamists -- an estimated 3,000 of whom are in jail.